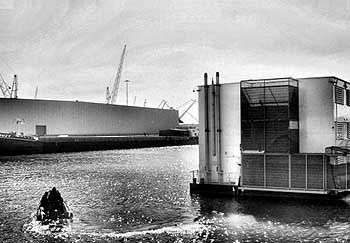 This article was also published on Wednesday 18 May 2005 under the title of People storage in the Netherlands in the New Matilda online magazine.

IN a quiet corner of the often-deserted Merwehaven in Rotterdam, the Netherlands - a much quieter harbour than the high-tech Maashaven, two flat barges are moored. Not that this in itself is something to carry on about - for centuries flat barges have been a common sight in the harbours of Rotterdam and Amsterdam, two of the world's biggest harbours.

It's the superstructure on these barges that attracts attention. They're painted white, and riddled with horizontal slots - air vents on closer inspection. The structures make you think of the ships we often see - and smell - in the Fremantle harbour in Western Australia. These ships come with the smell of the live sheep trade, a trade subject to protests and direct action by PETA, the live animal trade action group, that with a significant amount of success has brought the trade into the spotlight - by getting wool purchasers and manufacturers to ban products made from Australian wool. PETA action increased its exposure especially since it campaigned worldwide to expose the practice of mulesing, or the removing - without anaesthetic - of a patch of skin around a sheep's bum to avoid fly strike.

The air vents on the barges in Rotterdam, like those Fremantle live sheep export trade boats that sail from the West Australian harbour around the world, let in and let out the air for hundreds of live creatures. The barges are white, they are square, and they look like containers. There are 36 slotted, framed panels on either side. And the barges are filled with men who have committed no crime, 760 of them.

This is the Netherlands, the country I come from, the country that was instrumental in the formation of the United Nations and its Refugee Convention. This is the country that had its 24-hour rule for primary assessment of asylum claimants: within 24 hours you would know whether your refugee claim had any viability at all.

Pretty soon after the initiative of the barges became known, the locals in Rotterdam had their name ready for use, and they're now known as the bajesboten - formed from the Jiddish name for prison (bajes). It makes you think, when the nickname for the project immediately finds a link with the language of the jewish refugees who were strewn all over the Netherlands since the Second World War.

At the start of the project, the Ministry of Justice, led by its Minister Piet Hein Donner assured the Dutch that the maximum duration of detention would just be 120 days. But the false notion of having 'criminals' in the neighbourhood could not be silenced and the media preferred the sensationalising of their stories, and aided by opportunistic politicians - this is Holland in the period after Pim Fortuyn, the right-wing anti-asylum political candidate who was shot during his election campaign in 2004 - the notion of criminality became inevitably linked with the men in the bajesboten. And when some of the men managed to escape, questions from local government to the Minister of Justice in the Dutch Parliament were predictably not about human rights breaches of the men who had committed no crime but who were imprisoned nonetheless, but about whether or not the Minister could guarantee safety in the community now that the town of Schiedam - immediately bordering on the Merwehaven - had 'escapees' running around in the neighbourhood, and in a strange twist, concerned residents linked with the Socialist Party's MP Jan de Wit to demand the closure of the barges - but presumably for two very different reasons.

Bajesboten are cheap, the Minister argued when the second boat was opened in April 2005, about a third of the cost of conventional detention methods, but the The Hague party branch of the PvdA, the Dutch Labor party - much more to the left of the political spectrum than its British or Australian equivalent - hosts a discussion forum on its website, and comments include a call to Queen Beatrix to release all detained men on the occasion of her 25-year reign and the associated Silver Jubilee celebrations this year, quoting a line from a 16th century Dutch Freedom song where in the name of William of Orange the opening of the city's gates is demanded. [1]

Your "normal" situation on the bajesboot is a share situation with four men, but - as if being locked up in a container is not bad enough, there's also a chance you end up in an isolation cell if you cause trouble on board.

The situation of the folks on the barges shows a problem the Netherlands has not come to terms with, or for that matter the Western democratic world in its entirety. The 760 men on the boats are made up of two groups: those who were apprehended because they're in the country without permission, and those 'out-processed' asylum seekers who cannot be removed to their home country or to 'a third' country.

The warehousing of refugees, asylum seekers and those without papers or visas is a sign of an increasingly troubled way western countries deal with a problem created by their desire for clear and regulated border control. The more 'developed' a country becomes, the stricter its policies of exclusion of 'the other' become. The western world has up till now shown a blunt unwillingness to start debating the issue on a global level, otherwise than from the vantage point and from the intent to control its own borders.

The way we deal with the notion of borders and exclusion shows that we have no intention to start thinking globally when it comes to the movement of people, and that we're happy to practice anti-globalisation policies when it suits us. Little do governments admit that the end-product of globalisation includes the notion of permeable borders, even in Europe, which has shown that it is possible to have permeable borders between most of its member countries. For the sake of the men on the bajesboten, the people in the Baxter detention centre, and for all those who get imprisoned without having committed a crime, we need to urgently evolve the debate into one that suggests that the notion of open borders is one that cannot be reserved just for those already inside Fortress Europe, or those who are white, those who can show a credit card at immigration check-ups, and those who have a job.

There's only one planet, there's just one world, and we all live on this planet, and there's only "us" - the "them" we're so afraid of, don't actually exist. It's time this is heard, loudly and clearly, in the Halls of Parliament, whether that's the European Parliament, the Tweede Kamer in the Netherlands, or the Westminster Parliaments in the UK and Australia.

6 April 2006 - About ten months ago I wrote an article about the Dutch and the way they store away their "outprocessed" asylum seekers, published both on the Project SafeCom website and in the New Matilda magazine - a practice so nasty that it almost beats putting them far and far away in hot and arid desert 'refugee jails' like Baxter and Woomera.

This week the Dutch PM Jan Pieter Balkenende is visiting Australia, and ABC's Lateline is grabbing him for an interview tonight. I've asked Lateline to ask Balkenende some questions about the West Papua situation (see my background info here) and about the asylum barges.

According to reports in two major Dutch newspapers, The Telegraaf and NRC Handelsblad, the majority of MP's in the Lower House of the Dutch National Parliament in The Hague - the Tweede Kamer - just a few weeks ago demanded answers about fire hazards on board the barges, colloquially called "Bajesboten" using a Jiddish term for "prison" (bajes), they demanded explanations about the level of training of guards after one guard - who was also a journalist for another newspaper - had reported that with just one week of training the detention contractor Securicor allowed him to work on the barges, and the MP's wanted answers about multiple rapes by inmates, and drug deals on board the boats.

Last week in Parliament, the Justice Minister Donner and Immigration Minister Rita Verdonk defended that the barges were all safe, and dismissed a report by the guard/journalist in the weekly magazine Vrij Nederland about the barges, declaring that the magazine was wrong.