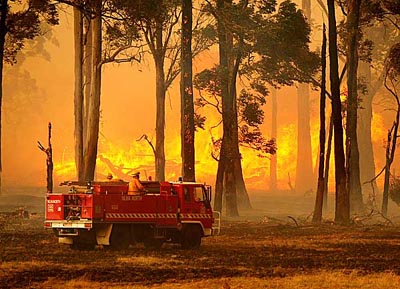 Climate change events: "When he ratified the Kyoto Protocol, the Prime Minister, Kevin Rudd, described climate change as the greatest threat facing humanity. Shaken, and clearly having seen things none of us should see, he has now witnessed proof of his words. We can only hope Australia's climate policy, which is weak, is now significantly strengthened." (Tim Flannery, after the Victorian fires)

Kevin Rudd's 5% reduction targets are not enough, and Australia's worst polluters should stop getting obscene subsidies from Australian taxpayers!

This page sends your letter to

• Minister for Climate Change and Water Senator Penny Wong, and

• Environment Minister for Peter Garrett AM

Several recent pages in the 'green' section of our website serve as background resource pages for this letter writing campaign. Some of these are:

26 February 2009: Australia's Climate Action Summit: Time for Climate change action - Kevin Rudd and Penny Wong avoid the issues, while thousands of people respond by 'Encircling The Parliament' ... The Rudd government's climate change policies, strategies and carbon reduction targets may well have been announced with much fanfare, but most of the announcements have amounted to a big sell-out to the polluters and they seem to pander to ....

20 February 2009: Australia takes its sun for granted - How Australia ignores its abundant sun and its energy contribution to a post-carbon society. An investigation into the Australian government's avoidance to use its main asset, the sun, and how it could power much, if not all of Australia's energy needs. Australia is not just avoiding its role in building a post-carbon economy, but more disturbingly, that it keeps itself beholden to the lobbying powers of the polluting industries that use coal as its core energy source.

19 February 2009: Black Saturday 2009: Reflections after the Victorian Fires - "It's possible some people may feel upset by the link being made in the media here and overseas between bushfires and climate change. I understand that people are shocked with grief. But there are many things we can and must learn from this tragedy, and one of them is this: The climate has changed. Our 5 per cent by 2020 carbon pollution reduction target is no longer politically viable. We are facing a climate emergency and [are] running out of time."

8 January 2009: Climate Troubles: the condemnation of Australia's Climate targets - The Rudd government's 'softly-softly' 5% targets have been roundly condemned by NGO's, climate scientists - and also by Ross Garnaut, Australia's climate change consultant, who was commissioned to write the papers, and now the head of NASA's Goddard Institute for Space Studies, Professor James Hansen, has written an open letter to Barack Obama about Kevin Rudd and Penny Wong's targets.

22 April 2008: The 2020 Summit: Coal Industry Chiefs overheat Kevin's Climate - "I found myself in the climate stream with representatives of coal mining companies including Xstrata and Shell, yet not a single person from an environment Non-Government Organisation. No-one from Friends of the Earth, the Australian Conservation Foundation, Greenpeace, Climate Action Network Australia or any of the State Conservation Councils."

How does the letter campaign work?

1. If you want to send all issues raised, just enter your details in the top section, then make any or no comments under each paragraph, and click the "Send the Letter!" button below the contents of the form.

2. If you would like to skip a paragraphed topic in its entirety, change the little round 'yes-no' button (called a "radio button") to "no, only my comment below". Do not make any comments on this topic, and the entire topic will be skipped from your submission.

3. If you don't know your electorate, choose "Don't know" from the drop-down list.

Note: Do not provide a false name or a false email address: you're sending a letter to our Federal Government and its Ministers, and your letter will be looked at as an expression of you as an elector.

This e-campaign has been closed, but please feel free to explore the page!

Letter to the Ministers