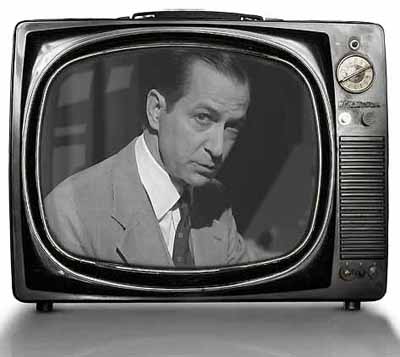 A smashing movie about a time, long gone - but not quite forgotten

The State of Western Australia and it capital Perth is generally viewed as a rather conservative environment.

Since the passing of Anti-terrorist legislation, you almost would expect an obedient and compliant State, where everyone supports these heinous laws without protest.

Not so, as I discovered the other day when travelling from Perth to Albany using the TransWA regional coach.

To my delight and quiet chortles, the bus company - a State government owned service, screened the movie Good Night and Good Luck during the trip. Last month one bus driver had already complained that one of his brand-new movies was a black-and-white flick.

Watching the movie against the ABC News playing details of the control order, where our friend Jihad-Jack was not allowed to have any contact with Osama Bin Laden, half a dozen dead would-be terrorists, and another half dozen terrorists who are safely locked away in the Guantanamo Bay terrorist jail, could only have come forth from the mouth of our Orwellian Attorney-General Philip Ruddock and his cohorts...

Anyway, seeing this multi-award winning movie about the McCartheism era in the USA, oh so comparable to what we're up to in Australia, raised my faith in the WA State government by quite a few notches - even though the government seemed to have taken in all the legislation so absolutely necessary. So while Good Night and Good Luck plays, every week TransWA churns away more than 90,000 kms in their 24 coaches, moving tens of thousands of people in remote areas - country WA, the home of Wilson Ironbar Tuckey, your eloquent Liberal MP who measures Sudanese refugees with an Aryan Purity yardstick (believe it, click the link!) and who applauds Australia's annual refugee intake even though the Sudanese don't measure up to this Nazi yardstick.... and meanwhile the bus company awakens the sleepy West Australians to our current affairs in relation to what we do to human rights and so-called terrorists. There's some sanity left on the bus in WA!

From OpenDemocracy.net
by Neal Ascherson
17 February 2006

George Clooney's new film brilliantly examines the freedom of the American media during the McCarthy period. But, asks Neal Ascherson, is it really old news, and who can take up the challenge today?

"This instrument [television] can teach, can illuminate and can inspire. But it can only do so to the extent that human beings are determined to use it to those ends. Otherwise it's only wires and lights in a box."

So said Edward R. Murrow, looking back on his career as an anchorman and commentator in the 1940s and 1950s for the American news station, CBS. At the peak of that career was his superb head-on challenge to Senator Joseph McCarthy. In that duel, the Senator was given the right of reply and tried to smear Murrow as a fellow-travelling jackal concealing his own Commie-loving past. But that lying onslaught, launched before an audience of millions against America's best-loved communicator, marked the beginning of the Senator's decline. Murrow did not break McCarthy single-handed. That was done by the Senate itself, which finally turned on the great witch-hunter in December 1954. But Murrow's attack, concentrating on McCarthy's methods rather than on the truth of his allegations, gave an example of civil courage in the name of democracy and justice which encouraged others to follow.

George Clooney has made this episode into a passionate and gripping film, Good Night, and Good Luck. It is shot entirely in black and white, which injects a 'period' urgency but - better still - allows Clooney to incorporate clips of archive showing McCarthy in venomous, bullying pursuit of his victims before his Senate sub-committee. He plays Fred Friendly, Ed Murrow's colleague, and David Strathairn acts Murrow himself - tense, elegant, a cigarette invariably cocked between his fingers as he speaks to camera.

But this film, to its credit, isn't just another story of "dauntless journalist exposes wicked Establishment". Certainly, Murrow is up against big battalions: McCarthy's own rabid supporters in Congress, the FBI, the armed services, the corporate CBS sponsors terrified of controversy. His job is on the line. And yet the real subject here is not Murrow but television. No medium of communication has such mass impact. Yet none is more vulnerable to interference by power, whether state power or the influence of corporate capital, or to accusations that it is deficient in patriotism And none can reap such quick rewards - access, sweetheart tax and licence favours - as a television outfit which becomes the toady of a governing clique or party.

In Clooney's version of CBS News in the 1950s, all these weaknesses are in play. Murrow says that television should illuminate or be a mere box of lights; the CBS management is not so sure of that. It's not simply fear of offending the advertisers and programme sponsors, rather that when the heat comes on, the executives lack confidence in the very identity of TV. In this film, the CBS president, Bill Taylor, finds himself under huge pressure to muzzle Murrow and pleads with him: "People want to enjoy themselves, they don't want a civics lesson!" And this lack of self-confidence, this instinct that television is primarily there to entertain rather than to alarm or preach, is present among many of the journalists too.

In Good Night, and Good Luck, Murrow and Friendly at first meet hesitation in the news team when it becomes clear that they are going to take on McCarthy. Some of the reluctance springs from fear. They know that if it all goes wrong and Ed leads them into disaster, CBS managers who hate the whole project will fire them with relish. They all glance back at their own political pasts, and a few of them admit to "pinko" traces which the Senator could use to destroy them and discredit CBS. One of them, the newscaster Don Hollenbeck, is denounced by the Hearst press as an old leftist, and commits suicide. But others are just not convinced that going after big dragons is television's job. Even Fred Friendly wonders at moments what the hell they are getting into. Murrow knows his comrade has these spasms of doubt, and makes a joke of it. "I always knew you were yellow", he growls. "Better than Red", says poor Friendly.

But the anger and vigour of Clooney's film are not really addressed to history. Good Night, and Good Luck is, very plainly, aimed at what is happening now in the United States. It is about the way in which this administration, in violating legal and constitutional norms and trampling over human rights and international law, has been able to intimidate or enlist a huge section of the media.

In a long and very frightening article in the New York Review of Books, Thomas Powers traces the steps by which President Bush has bypassed the Foreign Intelligence Surveillance Act of 1978 and secretly empowered the National Security Agency to "intercept the faxes, emails and phone conversations of Americans with blanket permission by the President." Powers gives credit to the New York Times for unearthing this story. But it emerges that the paper - "for reasons it has not clearly explained" - sat on its discovery for several months over the period of the 2004 presidential election, which the revelation might well have affected. Publication came only after a meeting of the publisher and executive editor with the President - at which it was apparently agreed to withhold certain details.

The American media have not performed well against the torrent of lies and news manipulation which has accompanied the whole "war on terror" and the occupation of Iraq. Newspapers, sensing the ultra-patriotic and credulous public mood after 9/11, have been cautious - with some brave exceptions. Local radio stations have been overwhelmingly aggressive towards dissent. But television coverage and comment has been timid and indistinct at best. At worst - as in the case of Fox News, which has taken the chance to offer itself to the administration as a 'loyal' public address system - it has been simply servile.

In a crisis of truth, it's not enough to personalise the problem. That's a theme which runs all through this film. Ed Murrow himself is not shown as a stainless knight of disclosure. We find, for instance, that he discreetly avoided attacking McCarthy over Alger Hiss, at a time when Hiss's links to Soviet intelligence were nothing like as plain as we now know that they were .When the slandered Hollenbeck begs him for support, he backs off, saying that he can't afford to take on Hearst and McCarthy at once (we also see him questioning Liberace about his plans for marriage, which seems a pretty disingenuous piece of journalism). More importantly, Murrow is shown insisting, time and again, that the problem is not so much Joe McCarthy himself as a cowed American public which has submitted to his moral terrorism. McCarthy, he says, "did not create this situation of fear; he merely exploited it". On air, he quotes Julius Caesar: "The fault, dear Brutus, is not in our stars / but in ourselves..."

In the same programme, Murrow famously said: "We cannot defend freedom abroad by deserting it at home". George Clooney offers this message to his fellow-Americans today. But where in the tame 21st century networks is the messenger who will deliver it?

Neal Ascherson is a journalist and writer. He was for many years a foreign correspondent for the (London) Observer. Among his books are The Struggles for Poland (1988), Black Sea (1996), and Stone Voices: the search for Scotland (Granta, 2003).