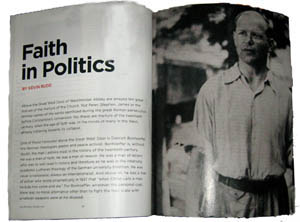 A Time to Burn: protest action at Perth detention centre

An act of protest (May 7, 2010) about the demise of Kevin Rudd's refugee sanctity

A Time to Burn: The End of Kevin Rudd's Bonhoeffer Confessions

The recently proposed anti-smuggling legislation, currently before a Senate Legal and Constitutional Affairs Committee Inquiry, meddles with the UN Smuggling Protocol, which defines smuggling as an activity "for a financial benefit". It removes this condition from Australia's Criminal Code, and everyone organising the entry of people into Australia will now be prosecuted as a people smuggler.

In October 2006 Kevin Rudd wrote the article "Faith in Politics" in the magazine The Monthly. In the article he held up the German theologian, pastor and peace activist Dietrich Bonhoeffer as his hero and personal inspiration.

Dietrich Bonhoeffer was hanged by the SS at the end of World War II, as is commonly stated for his attempt to assassinate Hitler, but he was arrested because he smuggled people out of Germany. Bonhoeffer participated in a rescue operation which succeeded in the 1942 smuggling of fourteen people from Germany to Switserland. It was this rescue, and irregularities connected to this action, which came to the attention of the German authorities that led to Bonhoeffer's arrest by the Gestapo in 1943.

The Bonhoeffer article has been cited numerous times by Australian commentators and human rights advocates to hold up the Prime Minister as a man of spiritual leadership and convictions.

As a result of his writings, hope arose that Rudd was the conviction politician who would lift Australia from the disastrous period during the Howard years. Under Howard's prime ministership, objectional human rights abuses and serious undermining of United Nations Conventions took place, and thousands of refugees tremendously suffered from his hardline and cruel treatment in Australia's detention camps and in the community.

As a result of the publication of Rudd's article, thousands, if not tens of thousands of Australians started to trust and hope for an end to immeasurable cruelties to the treatment of refugees and 'boat arrivals' by Labor under Kevin Rudd.

Under the new anti-people smuggling laws Prime Minister Kevin Rudd would prosecute his spiritual hero - the theologian who spiritually inspired him - as a people smuggler, and throw him in an Australian jail for up to twenty years.

Event: A Time to Burn

This event will take place during an All Night Perth Airport Detention Centre Vigil, organised by the Refugee Rights Action Network (Fri, May 7, 6pm through to Sat, May 8, 6am)

10 December 2006: Mission accomplished: Labor's back with a Rudder that works - We can be confident that the ALP's troubles have melted into thin air with the appointment of "the dream team", and especially the fact that Kevin Rudd is its leader. From Rudd's theology follows a vision of social responsibility in action - an vision that will eventually also spell an inevitable end to mandatory detention.