Fun, Laughter and other Seditious Causes

An evening of Forum Theatre

Make the right joke in public - the man in dark glasses will follow you around town. Draw a cartoon - and find yourself in a secret court. Write a hot news article - and you might end up in jail.

Just like last year, Rina Sani and Omar Pumar Romay of ORISHA International have generously offered once again one of their exquisite performances to Project SafeCom as a fundraiser during this year's annual tour of West Australian schools and communities. In turn, the KULCHA Multicultural Arts Centre in Fremantle has offered to host this performance.

Fun, Laughter and other Terrorist Causes will include Urubu (a solo segment from Storm in a Skull an ORISHA International theatre production), and an exciting session of Forum Theatre with Brazilian Theatre Director Omar Pumar Romay.

Urubu is trapped in-between 'realities'. His mind and body seem to divorce themselves from the other. Added to his confusion is the fast-talking Viva who convinces Urubu of necessary memory upgrades. Experience the joy and pain as Urubu encounters his dark (perhaps sinister) past memories from The School of the Americas. Urubu is an Australian hybrid theatre performance evolved from improvisations and cultural fusion of styles between renaissance Italian Commedia dell arte and timeless Indonesian wayang. 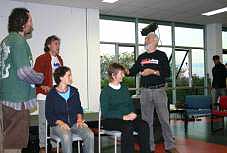 Forum Theatre is an effort to transform theatre from the "monologue" of traditional performance into a "dialogue" between audience and stage, experimented and developed by Brazilian theatre practitioner Augusto Boal. Boal's explorations were based on the assumption that dialogue is the common, healthy dynamic between all humans - that, all human beings desire and are capable of dialogue, and that when a dialogue becomes a monologue, oppression ensues. Forum Theatre then becomes an extraordinary tool for works arising from improvisations to create scenes of specific oppression. Forum Theatre seeks to highlight person/group (the protagonist/s) who attempt(s) to deal with oppression and fail due to resistance from one or more obstacles (the antagonist/s). Forum Theatre scenes can be virtual one-act plays or short scenes. In either case, a full presentation is offered to the audience. The joker (facilitator) then involves the audience to provide alternative choices for resolutions/outcomes. 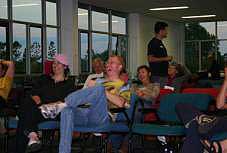 The two Forum Theatre photos were taking during the "Your Identity Please", a Forum Theatre presented by ORISHA International during the Brisbane Social Forum (May 2006). Both photos on this page are clickable to open a larger version.

A qualified Assessor and Workplace Trainer for Theatre (Actor Skills Development & Training), Omar facilitates awareness of physical, emotional and mental workings to assist with unlocking individual spontaneity and creativity, within the essential dynamics of theatre as a collaborative social process.

In what he regards as the Bio-Mechanics of the Performing Body, Omar provides participants with a wholistic and sensitive approach to emotional, mental, and physical wellbeing in every aspect of his practical workshop experiences. His work extends beyond the Arts, Education and Recreation, having had successful outcomes in the areas of personal growth and empowerment, drug rehabilitation, psychiatric support, torture and trauma healing.

Help - there's a terrorist at my table!

When it comes to resolving personal, political and social issues, Project SafeCom coordinator Jack Smit says it's time to play.

Smit spent five years training in psychodrama - a type of group therapy based around role playing - and believes it is a holistic approach to conflict resolution.

"We're all lumped with masses of incomplete communication, Smit tells the Herald. "Psychodrama is about unfinished business in a drama context. Using psychodrama to deal with a personal issue, you become the director of a drama based on an incident from your life.

You reinvent the situation, using other group members as actors. The idea is that, by reinventing the situation, you will be able to resolve it in your own mind.

Smit says it's also important the protagonist takes on the roles of other characters within the drama. "This gives the protagonist the opportunity to feel what it's like to be that other person," he says. "You may look at a situation and think, 'Maybe that was a bit shit of me'."

Smit developed an interest in psychodrama because "coming from a big Dutch family is a lot of work. In all families, no matter how happy, there's large amounts of drama, he says. He started the psychodrama course as a means of dealing with his own personal anger, but has found the techniques beneficial in his current work with Project SafeCom.

Smit believes a form of social psychodrama, called sociodrama, could be used to deal with social and political issues, such as terrorism.

"Our normal ways of dealing with issues can be very disabling and incomplete," Smit says. When it comes to dealing with terrorism, for example, Smit believes we need to use sociodrama to "invite everyone to the table".

"Even if there are no terrorists in Australia, there is a fear of terrorism, which means there is like a terrorist sitting next to you at the table."

In sociodrama, the terrorist belongs to the drama. They would be interviewed about what they want and why they want it, to give a complete understanding of the situation.

"I want to point to the idea of sociodrama as one of the says of dealing with the issues," he says.

Whether it's in a social or personal context, by failing to act situations out - at least in our minds - we're not properly resolving our issues.

Any performance that requires audience interaction is a bit of a gamble. If your audience is forthcoming and vocal it can be great, if they aren't then it makes everyone uncomfortable. Last week's audience of 40 at Kulcha for Fun, Laughter and Other Seditious Causes were at first subdued but eventually relaxed enough to get involved.

The performance follows a man, named Antonio by an audience member, who receives a memory chip that wipes his memory and allows him to be whoever he wants to be. He decides he is "the chosen one" and it is his destiny to "make everybody right".

To do this he enlists the help of a secretary and sets about making up rules for a society where everybody is happy. What follows is dissention as the rules become progressively more and more totalitarian.

The point of forum theatre is that actors set up a potential situation and, with help from audience reactions and suggestions, come up with possible solutions.

The situation did take a while to set up, and the early parts of the performance were a little flat, but once the plot got going it was entertaining and thought-provoking.

Political theatre can be intimidating especially when you are expected to share your own opinions, but the use of puppets, masks and music made the forum more relaxed and encouraging.

The audience were initially unresponsive, but as the story progressed they warmed up and by the end of the night everyone was on their feet in protest against the oppressive rulers.

The message of the evening was clear - if you have a problem with something, speak up about it. Whether you are at a theatre performance or at a protest rally, your voice is the most important weapon you have.