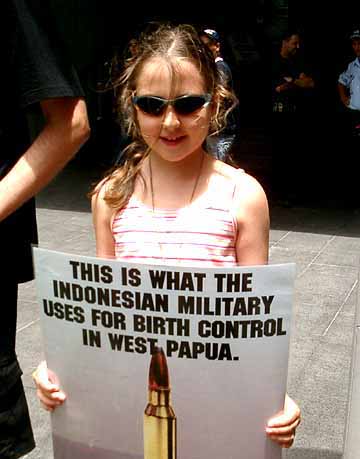 Rallying for the Papuans

Within a week of the 43 Papuans arriving near Weipa in Queensland, Australians voted with their feet and rallies were held in several states. Below are photos from the rallies in Sydney, Melbourne and Darwin.

And of course in the rallies the Morning Star, West Papua's flag of Independence, provided a central focus and an essential feature at the rallies. According to Chris Richards of New Internationalist:

Until 1 December 1999, the Indonesians treated the raising of the Morning Star as an act of treason. Jails all over the country held Papuans imprisoned (some for up to 25 years) for raising their flag. The security forces surprised everyone by announcing that the raising of the flag would be permitted on 1 December 1999. In an emotional and peaceful ceremony, the capital city of Jayapura became 'Papuan owned' for a day. People throughout the country excitedly began preparations for the grant of independence that they thought would necessarily follow."

On Christmas Island -
and the Darwin Rally