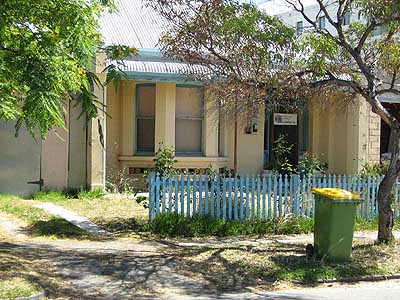 The End of Scott Street

We received the offer for the free house at the start of the 2004 summer.

It was sheer joy, and it opened our unexpected metropolitan presence - in beautiful Fremantle of all places

So, after a busy bee weekend, during which we received cooperation from more than 20 supporters and members, who helped with a complete re-paint of the inside of the house while they brought food and drinks, we moved in during January 2005.

Alas, all good things must come to an end. So, come January 2008, with many boxes in the hallway, we ended this era. On the way to new openings, new possibilities, and towards the turning of a new leaf in our history books...

This page brings together some photos taken at the Scott Street house, and the article from The Fremantle Herald announcing the closure of our time there.

Many, many thanks to you, Larry, and to you Liana!

Click on the thumbnails to open the large version of the images....

With the South Freo home up for sale [1], Project SafeCom has been put in the invidious position of fighting for refugee rights while having to look for a new home itself.

"A shed, a backyard studio, a room," would suffice according to frontman Jack Smit.

Project SafeCom has spotlit many issues, such as the former Howard regime's attempt to stop Norwegian ship Tampa delivering 433 stranded asylum-seekers off Christmas Island into Australia in 2001. (Incidentally, the Tampa was docked in Fremantle harbour last week.)

The group would not be going easy on the Rudd government either, Mr Smit assured. "There's a fear in Labor to undo what Howard did," he said, adding he'd hold the Feds to their pre-election promises of a more humanitarian approach to refugees.

Note 1: The Herald is actually incorrect in stating that the house is up for sale. Larry and Liana just plan to move in after a renovation.