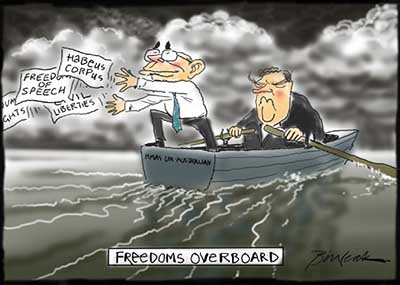 Image: Thanks to The Australian and Bill Leak cartoons

"More than 500 people packed into a forum at the University of Western Australia on Friday 4th November 2005 to express their fears and anger at the government and its proposed anti terrorism legislation. The distrust of government both federal and state was palpable. Emotions ran high at the failure of the Labor opposition to oppose this appalling threatening legislation, with disbelief expressed that this could be happening in this country of ours."

"There were calls for Federal Labor to oppose the Bill in both the House of Representatives and the Senate. The WA State Labor government should not cooperate on the implementation of such "draconian legislation."

The Perth forum was addressed by Carmen Lawrence, Federal Labor Member for Fremantle, Rachel Siewert, Greens WA Senator, and Mark Cox, a human rights lawyer. Below is the address to the forum by Michael Sinclair-Jones, the WA Branch Secretary of the Media, Entertainment and Arts Alliance.

My name is Michael Sinclair-Jones and I am the WA Branch Secretary of the Media, Entertainment and Arts Alliance.

Our members include journalists, artists, photographers who work in print, TV and radio; and actors, filmmakers and other creative workers employed in a broad range of cultural arts and entertainment industries.

I am here today to inform you about my union's grave concerns for the future of free speech in Australia arising from the Federal Government's proposed new anti-terror laws.

Our primary gaol is to protect and defend our members' rights to freedom of expression to enable them to do their job properly without threat of fines or imprisonment.

I don't need to remind you that free speech is the cornerstone of a democratic society.

The right to expose, criticise and even mock public officials is an essential element of a society in which all citizens have a right to be fully informed about how their country is governed.

The proposed new laws pose a dangerous threat to that freedom.

New laws that extend the meaning of the word "sedition" will drastically erode free speech and artistic expression.

Sedition laws were last used in 1949 to jail Australian Communist Party leader Lance Sharkey for answering a journalist's question on the telephone about whether Australians would welcome Soviets in this country.

Sedition has been described as "the sleeping giant of authoritarianism - it politicises criminal law and has the ability to inhibit free speech and restrict open democracy".

For instance, British playwright David Hare's recent play "Stuff Happens" about the US-Iraq War clearly invites audiences to mistrust, disbelieve or ridicule much of what the so-called "Leaders of the Free World" are saying about the war.

The new laws make it possible to claim that criticism of Government policy in Iraq might assist terrorists and thus falls within the new, broader definition of sedition.

It will no longer be necessary to prove that a person urged others to use force or violence to commit the crime of sedition, only that the effect of their work might urge others to carry out such actions, even if those actions never occurred as a result.

Such sweeping powers are breathtaking in their scope to stifle free speech and radically alter the nature of public debate in Australia.

Each example, whether it be a news report or documentary, play, film, book, song or TV program, could constitute sedition under Australia's proposed new anti-terror laws.

At the very least, the new laws will stifle or drive underground the free expression of opinion and of creative or artistic responses to public and government affairs.

It paints a frightening picture of an emerging new totalitarian state similar to George Orwell's "1984", a book that would be banned if it was written under the new anti-terror laws.

In addition, any journalist who reveals the arrest of a terror suspect, their length of detention, or any other detail of a Federal Police detention or control order, faces five years' jail.

My union believes the penalty aims to silence journalists, intimidate them into submission, and will allow miscarriages of justice to go unquestioned and - inevitably - unnoticed.

The media's ability to inform Australians about Government actions will be further crippled by increased Federal Police powers to demand documents that they claim may relate to terrorism.

Journalists will be forced to hand over information - including the identity of confidential sources - if police believe it will help them investigate a "serious terrorism offence".

The penalty for refusal to comply - as may be required under Clause 3 of the Journalists' Code of Ethics: "Where confidences are accepted, respect them in all circumstances" - is $3,300.

The only exception to the Code is if disclosure leads to "substantial advancement of the public interest" or averts the "risk of substantial harm to people".

Any journalist who reveals that they have been issued with a police order or discloses its contents faces a further fine of $13,200.

The threat to jail investigative journalists who seek to obtain private information means nobody will speak to the media.

Only one viewpoint will be heard - that of the Government.

You only have to look at the way the Federal Government sought to jail two Herald Sun journalists for refusing to name the source of leaked Cabinet documents to see that this is not fanciful speculation.

It was only yesterday, after weeks of extreme pressure from the media and public, that the Government announced moves to have the charges dismissed.

The precedent for jailing journalists for doing their job was set in Perth 16 years ago, when former Sunday Times journalist Tony Barrass became the first journalist in Australia to be jailed for refusing to name a Federal Government source.

It is possible that the Government and Premiers did not intend to draft new anti-terror laws that will have such extreme consequences.

Some critics claim existing laws against sedition are strong enough to combat new threats of terrorism.

My union is urging members to write to the Prime Minister and all Senators to warn them that extreme sedition laws are dangerous and unnecessary, and should be excluded from the legislation.

These are serious threats to our democratic society.

We risk becoming a totalitarian state for fear of terrorist attack on our democracy.

We cannot and must not allow that to happen.