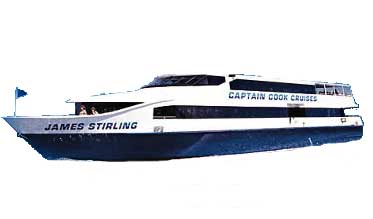 On Friday 20 February 2004, many "front-line refugee defenders" are in the Perth metro area.

They're all participants in the UWA Perth International Arts Festival - see the Perth Festival website at www.perthfestival.com.au.

So far Julian Burnside and Kate Durham, Marianne Dickey, Eva Sallis and Kate Reynolds have confirmed to participate in our planned Swan River Cruise from Perth to Fremantle. Margeret Reynolds may not be able to slot in the afternoon, and while Arnold Zable is only a few blocks away, he's conducting a workshop at the time. Uniting Church worker Rosemary Miller will also try to make some time free to join us. We'll also be inviting Federal ALP's immigration spokesman Stephen Smith and member for Fremantle Dr Carmen Lawrence.

We have arranged for a one-hour "boat cruise" with the luxury Rottnest ferry (Captain Cook Cruises) from the Perth City (Barrack Street Jetty, a 7-minute walk from the Duxton Hotel) to Fremantle on 20 February (boarding 13.30 to sail at 14:00) followed by some refreshments in "A Slice of Heaven" (E-Shed Markets, directly opposite the Boat landing in Fremantle Harbour) at 3:20pm, to return with private cars (provided by volunteers) and taxis if necessary to Barrack Street in Perth, as well as the Duxton hotel, leaving Fremantle at about 16:15, arriving back in the city at around 16:45pm.

The cost of the cruise is $16.00 per person, and it would be an opportunity for many people to join - the cruise boat has no problem reserving 40-60 seats for us in a roped-off area - so we can spend some time together for informal chats on board the ferry - as well as over a coffee or so at A Slice of Heaven at Fremantle harbour.

Note: We're still looking for some folks to join us in Fremantle, who are also prepared to return guests who join us at the Barrack Street Jetty to the City at the end of our time at "A Slice of Heaven. Please let Tina and Holly know if you're coming by car and if you're available to transport some folks.

Kate Durham and BBC reporter Sarah Macdonald "went to the tiny island [of Nauru] posing as tourists and used hidden cameras to record the plight of detainees held as part of the Howard Government's Pacific solution. "It worked because we looked like stupid blondes. We had these little cameras in bumbags around our waists, with sound and everything. We secretly filmed but I was nervous and bad at it..."

Founded by Kate Durham and others, this community-based project is designed to help refugees and asylum seekers find hospitality and welcome in Australia. Spare Rooms for Refugees invites you to register your willingness to house a refugee or refugee family in a house or a flat of your own.

Kate Reynolds MLC is a State Upper House member in the South Australian government for the Australian Democrats. You can read Kate's Parliamentary Speech when she tabled the motion "...that the South Australian parliament condemns mandatory detention and the Pacific Solution as crimes against humanity."

24 October 2003: Kate Reynolds: Motion in condemnation of Australian Refugee Policy - "I hang my head in shame at the treatment of refugees in this country. It is time that the nation's military intelligence resources and actions were directed towards detecting real terrorists, rather than stopping refugees from seeking asylum in our country as is their legal right."

Eva Sallis' Novel Mahjar: "Vibrating with life and woven with evocative Arabic fables, these stories are about the differences between Lebanese and Australian culture: between parents and children, new lives and old. With warmth, humour and insight, Sallis's eloquent prose captures the pain as well as the joys of living in a new land."

The Australia Is Refugees! Essay Competition project ran during 2002. The project was an initiative of Australians Against Racism - and its President Dr. Eva Sallis of Adelaide University. It was an exceptionally successful schools competition run at primary schools (years 6 and 7) and high schools (years 10-12). Hundreds of children and young adults from all over Australia participated.

23 February 2004: Dark Dreams: Australian Refugee Stories - With editors Sonja Dechian, Heather Millar and Eva Sallis, this is another remarkable book published under auspices of Australians Against Racism. The book is the result of many refugee stories that were submitted for the Australia Is Refugees Essay Competition for young writers in 2003 in primary and secondary schools around Australia.

Marianne Dickey is an Advisor and researcher of refugee issues and policy to Democrats' leader Andrew Bartlett, Senator for Queensland. Marianne has the unique position of being one of the very few, if not the only Australian non-parliamentarian refugee defender who has visited the detention centre on Nauru twice. Like Andrew Bartlett, she is a longstanding Project SafeCom supporter.

For some Parliamentary speeches and motions as well as articles on the Minasa Bone, SIEVX and Nauru by Andrew Bartlett see: