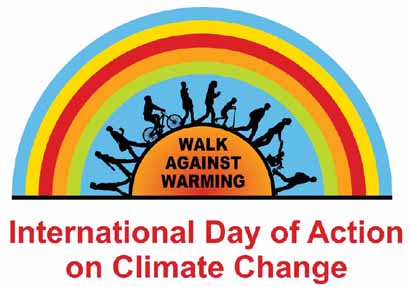 All over Australia, there's a Walk Against Warming

Thousands of people have turned out for rallies across Australian cities to raise awareness of climate change. The Walk Against Warming was an international event with similar marches happening around the globe.

The biggest march was in Sydney as thousands of people walked from Martin Place to the Botanical Gardens. Campaigners opposed to coal and nuclear power and are calling for the Government to adopt more solar and renewable energy sources.

Greens Senator Bob Brown addressed the crowds before the walk began. "This lucky sunny country of ours can turn what is a despairing situation into a world of optimism, using our technology to make the whole world sing with renewable power and energy efficiency which doesn't threaten the future," he said.

Organisers of the protest march in Canberra say more than 2,500 people took part. Policy adviser to the federal Greens and former deputy director of the Australia Institute, Richard Denniss, addressed the gathering and criticised the Federal Government for failing to adhere the agreement it made at the Earth Summit in 1992. "We agreed that developed countries have the responsibility to act first," he said.

Campaigners in Queensland are hoping today's international day of action will increase pressure on all levels of government to do more to address the problem. Thousands of people were expected to take part in the Walk Against Warming in Brisbane's CBD this afternoon.

Glenda Pickersgill is fighting the State Government's plan to dam the Mary River, near Gympie, and is urging Queenslanders to get involved in saving the planet. "We will join with thousands of other people down in Brisbane to show people power that climate change is really important," she said. "We have got to be thinking and planning for future generations to stop this problem."

A large crowd of people gathered at Hobart's Princes Park to mark the international day of action on climate change. Peaceful protesters made their way through the city holding banners criticising the proposed Gunns pulp mill and the Howard Government's refusal to ratify the Kyoto Protocol. Organisers of the Walk Against Warming say Tasmanians are noticing the effects of global warming, with a record dry winter this year and recent bushfires. The crowd gathered at Princes Park where they will be addressed by state greens MHA Nick McKim and members of the Wilderness society.

In Adelaide 1,000 people marched the four kilometres from the airport to West Beach. Peter Owen from the Wilderness Society says the march was a cry for the Federal Government to act. "At the moment I think we're still in denial over the implications of climate change," he said.

We know you do.

The only way we can be certain government and politicians and political parties will have the necessary will to act is to mobilise the community around climate change like we've never seen before.

Now is a time for courage - we need people everywhere, scientists, academics, government officials, politicians - to break ranks, to risk their public sector careers, to join unlikely alliances around climate change, to become heroes to a very worthy cause.

We need people to demand the government take action over something that has the potential to destroy our children's futures. We need politicians to be scared about their political careers if they don't take the necessary action on climate change - action which includes a good dose of community education on the issue as well as regulation and incentives.

If you want your kids, your grandkids and your great-grandkids to inherit a planet capable of supporting human life, make sure you join the thousands of other people at Walk Against Warming on November 4.

:::CALL TO ACTION::: Monday 18 September 2006: A Planetary Emergency: Earth on the boil - this week, of all weeks in the year, seems a most opportune week to send you Project SafeCom's 'brand-new' publication - the brochure "From Climate Change to Climate Justice".

Where can I Walk?

Parramatta (NSW) - 9:30am Amphitheatre (near the Town Hall)

What you can take:

Take lots of copies of the Project SafeCom Climate Justice flyer. You can download it from here:

Join together in Perth for the

Inspiring speakers, great entertainment, local music and a range of informative displays will greet you at the end of the 1km walk which winds up at the Perth Cultural Centre (opposite PICA).

Our planet's future is our children's future - protect the future today!

To help (we need volunteers) or for details: Sian Churcher on (08) 9420 7266; email: wo [at] conservationwa.asn.au; web: www.walkagainstwarming.org

Walk Against Warming
And Take Steps at Home!

Cate Faehrmann is the Director of the Nature Conservation Council of NSW, the State's peak environment group. She is also a key organiser of the climate change mobilisation event, Walk Against Warming.

Climate change is, without a doubt, the single biggest threat facing humanity. Yet the resistance of governments to tackling it is mind-boggling. The fumbling around by governments at all levels, the slowness with which they are even acknowledging climate change is happening, the refusal to ratify the Kyoto Protocol, the incredible imbalance between the billion-dollar fossil fuel subsidies and the pocket change given to renewables, the blameshifting, the excuses, and the greenwashing means that something has got to give.

That something is apathy. If governments are to take the steps so urgently needed to avoid dangerous global warming, apathy must give way to community anger and action.

As Australians, we owe it to the world to ensure that we take action on climate change, not least because we are the highest emitters of greenhouse gases in the world. Our emissions per capita are six times as high as China's and we emit more greenhouse gases than Indonesia, which has 10 times our population. Yet even when it comes to supporting renewable energy technologies, Australia is very much the laggard nation.

The proportion of energy we get from renewable sources must, and can, be increased to at least 25 per cent by 2020. This needs to be legislated or we risk losing the investment so desperately needed now to ensure a thriving renewable energy industry. The renewable energy industry is one of the fastest growing new global industries, growing faster than IT or tourism. Australia should be among the world leaders in this industry and the Federal Government should be throwing all available support behind this sector, which would lead to enormous job opportunities, many in regional Australia.

We have the technology to reduce our greenhouse emissions now. What we don't have is the will - the will of governments to stand up to big business and industry, and the will of communities to demand action and change. The fact that Australian governments are not moving away from activities which they know will render parts of our planet uninhabitable for humans and around one quarter of all species extinct is nothing short of criminal.

Ninety three per cent of these subsidies went to support the production or consumption of oil or petroleum products. Only around nine per cent of the identified subsidies actually reduced greenhouse gas emissions from fossil fuel usage.

It is perhaps stating the obvious to note that a changing climate doesn't recognise a nation's borders. If our goal is actually to save the climate and our kids' futures, not just to make ourselves feel better, we must accept responsibility for the greenhouse gas emissions that will be produced by us and for us.

The hard fact is that the only thing that will reduce our greenhouse gas emissions to the levels needed to avert dangerous climate change is to begin winding back our use and export of fossil fuels. For this we need an ambitious, courageous action plan to redirect the massive support which the fossil fuel industry has been receiving for decades to the renewables industry and energy efficiency technologies. And we need it soon.

We clearly cannot continue life as usual, consumption as usual, energy wastage as usual, fossil fuel subsidies as usual, or government and community apathy as usual, because climate change will overtake us, our environment and our lifestyles.

It is time for us to get off our tip-toes and start sprinting like hell - towards a clean energy future, not away from it.

We need climate change to make headlines. Meetings, summits, policy commitments, glossy reports are all meaningless unless governments have the will to act now and the courage to turn their back on the fossil fuel industries and embrace the clean renewable technologies that are waiting in the wings. Governments need to shake hands with the coal and oil companies, give their condolences, say 'sorry it didn't turn out, mate' and walk away.

Now is a time for courage - we need people everywhere, public servants, politicians, sporting identities, industry CEOs - to break ranks, to risk their careers, to join unlikely alliances around climate change and to become the heroes of this worthy cause.

We need to harness the commitment and energy of each and every concerned individual to build a movement on climate change that is too big to be ignored. Many of us will have to get out of our comfort zones and start doing whatever it takes to give state and federal governments no choice but to act on climate change.

People are starting community groups all over the country to provide a collective voice for a cleaner, safer future and more and more individuals are becoming local leaders on climate change (see www.climatemovement.org.au).

We need thousands of people, putting in thousands of hours, linking in with the thousands of other people worldwide to win the battle to save our environment: the one battle we can't afford to lose.