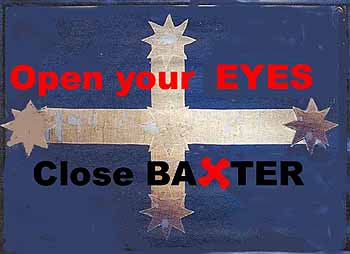 Below is the report of the first visit by Joy Huson and (former) Labor Party MP and Minister (from 1978 to 1999) Gareth Evans MP to the Baxter detention centre. The letter is remarkable, because had it not been written after the first visit, it may well have never been written. The personal involvement and the shared pain would have intensified, and as a result the level of observation in detail may have diminished. Please read on and ... shiver.

18 August 2005: When the Baxter fence closes: life after permanent detention - Life after Petro Georgiou seems to have changed considerably with detention centres running near-emtpy for asylum seekers. But, has it improved?

30 March 2005: Once You've Been to Baxter You Can't Sit on the Fence - By Anna Rose, NUS National Environment Officer: "I spent this Easter in the desert. I spent this Easter protesting at Baxter detention centre to draw the world's attention to the injustice of Australia's racist and inhumane mandatory detention system and treatment of asylum seekers."

27 February 2005: Talking about Cornelia: the Baxter detainees Statement - A page about Cornelia Rau, who was "lost" inside Australia as 'Anna', classed as an 'illegal immigrant' without any evidence for this by Department of Immigration staff.

Gareth and I got home last night from Baxter Detention Centre in South Australia where we have been visiting a young refugee we have supported for some time now. To protect his privacy we have changed his name to 'Arif'. He has been in detention for the past four years, formerly at Woomera and more recently Baxter. We are both overwhelmed with the life-changing experience of our visit and are very keen to tell our friends just what is actually going on.

Whilst Cornelia Rau's ghastly experience has outraged Australians, her case is not atypical and similar treatment has been happening on a large scale to refugees in detention across Australia. Her case does expose the treatment of people by DIMIA, the bungling by Public Services and the "I didn't know" from politicians who surely are required 'to know'. Shamefully Cornelia's case is the tip of the iceberg.

Baxter is over 3 hours drive from Adelaide and 13 hours from Melbourne and is located 12 kilometres beyond Port Augusta, on the edge of the desert. At first sight visitors are struck by the remoteness and hostility of the environment. A more arid and depressing location could not have been found. The site is managed by a private company, Global Solutions.

Visitors must agree to the following procedures for admission:

Some rules make no sense at all

We met many lovely young people while we were at Baxter Detention Centre. All, without exception, came over to us to shake our hands, to thank us for coming to visit. Even though we weren't there to visit them specifically they stop for a chat. They are so hungry for human contact from 'outside'. Their dignity and gratitude for our 'kindness' was humbling.

Many cases are currently before the Minister for review, including Arif's and Matteen's.

In Arif's case, in December he was granted an Afghan passport by the Afghanistan Embassy in Canberra - until then, DIMIA had insisted he was Pakistani and "not at risk" if deported. His case is now before Minister Vanstone to lift the bar on his re-application for a Temporary Provisional Visa. If the Minister agrees to this, he may have to undergo the whole interview process again - from what we understand, a harrowing ordeal, given his current psychological state AND he will THEN undergo health and security checks.

Until then, we await Senator Vanstone's pleasure.