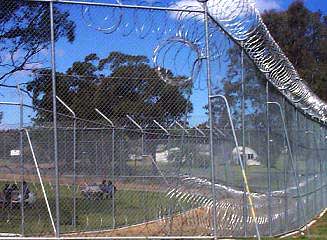 Rolls of razor wire, unbreakable steel fences and layers of imprisonment: State Powers at work in the Villawood detention centre in Sydney.

As soon as they sail into our area, we lock them up and throw away the key

Sound incredulous? Well, we do just that. We lock up all asylum seekers who have the temerity to sail to Australia under their international rights to seek protection.

You've just landed on one of the very first pages we made for our website - in November 2001. It's a simple page, and perhaps it's a little blunt. That's exactly its intention, helping to bring everyone's focus on to our first mandate since we established in those days.

The conservative government of John Howard came and went - by the end of 2007. The new Rudd government seems more human and we can talk to them - but even while the Baxter detention is now closed, and the Nauru detention centre and the "Pacific Solution" has come to an end, Australia still has refugee jails.

So, we're leaving this page intact on our website. We're keeping our Barbed Wire Cells intact - right below.

Under our Barbed Wire Cells are links to some more pages - as we re-write this page in April 2008, there are more than 1,000 pages of information on Australian human rights in a period of serious planetary changes for you to browse through.

Australia has a policy of mandatory detention for all refugees and asylum seekers who arrive by boat on its shores.

This represents a radical departure from any other country that signs the United Nations Conventions - The Universal Declaration of Human Rights (UDHR).

Mandatory detention of asylum seekers places Australia at a great risk of becoming a nation which commits human rights abuses of the first order.

Not only places it Australia at a risk of that, it also has already been evidently shown to be so.

This page talks about these issues. It consists of quotes from reports and of speeches by eminent Australians.

"Mandatory sentencing - which I prefer to call compulsory jailing - is a nasty insidious creation of our generation that not even the convict settlement introduced. What is more - compulsory jailing legislation expressly abandons the internationally agreed principle of imprisonment as a sanction of last resort, with priority given to other interests."

"We are now the only developed country in the world which practises indiscriminate indeterminate incommunicado detention of asylum seekers. Alone of all countries in the world, including Canada, the United States and the nations of Europe and Scandinavia, we have indiscriminately detained all of them - the elderly, the children, the sick and the pregnant - at a cost by the way of around $50,000 per person per year...."

Recently, when 1,000 Kurdish refugees were beached on the southern French coast, we saw a French Minister moving to the place to see that the refugees were properly treated. It is plain she thought they had been through a considerable ordeal. A number had already been taken to hospital for treatment. The first task was to make sure that anyone who needed medical care, received that care and then they could talk about longer-term solutions. It was a humane and sympathetic approach. The refugees were treated with dignity and esteem.

On Australia's record of recent times, our reaction would have been very different. What we do damages Australia's name as a compassionate and humane country.

"....the truth of the matter is that 85% of these people will become Australian citizens, or at least be released into the community on temporary protection visas.

And I believe that we're taking survivors of some of the most ruthless political regimes and destroying what little resilience they have left.

And we're really breaking people and making it extremely difficult for them to make an ongoing productive contribution to Australian society.

And I suspect that this is going to place a large burden on the health system, as people get released from detention.

And there's already substantial evidence to support that in services being provided to some of these people after release.

Two articles from the Draft Policy on Mandatory detention of Asylum Seekers:

The detention of refugees and asylum seekers is an exceptional measure and should only be applied in the individual case, where it has been determined by the appropriate authority to be necessary in light of the circumstances of the case and on the basis of criteria established by law in line with international refugee and human rights law. As such, it should not be applied unlawfully and arbitrarily and only where it is necessary for the reasons outlined in ExCom Conclusion no. 44, in particular for the protection of national security and public order (e.g. risk of absconding). National law and practice should take full account of the international obligations accepted by States, including through regional and universal human rights treaties.

Initial periods of administrative detention for the purposes of identifying refugees and asylum seekers and of establishing the elements for their claim to asylum should be minimised. In particular, detention should not be extended for the purposes of punishment, or maintained where asylum procedures are protracted.

There is a qualitative difference between detention and other restrictions on freedom of movement. Many States have been able to manage their asylum systems and their immigration programmes without recourse to physical restraint. Before resorting to detention, alternatives should always be considered in the individual case. Such alternatives include reporting and residency requirements, bonds, community supervision, or open centres. These may be explored with the involvement of civil society.

Convention relating to the Status of Refugees. Document available from our Documentation page.

In June 2001 an all party Federal Parliament Human Rights Committee found conditions in some detention centres are appalling, with standards often below those experienced in Australian jails.

After examining much evidence and personally visiting the detention centres and meeting detainees, the committee made several recommendations including the following:

This Report reinforced many of the findings of an earlier report by the Commonwealth Ombudsman. The Ombudsman noted that detained asylum seekers have been subject to inappropriate use of force and have had their rooms trashed by guards for no apparent reason. The Ombudsman went on to say that detainees in Australia have fewer rights than jail inmates. (The Age, 7 March 2001)

Document available from our Documentation page.

Below are some linked page summaries. They bring you to pages that link to dozens of other pages about Mandatory Detention in Australia.

9 February 2008: The End of Howard's cynical Pacific Solution - 'The last 21 Sri Lankan asylum seekers on Nauru have been recognised as refugees and approved for resettlement in Australia, closing the book on John Howard's notorious "Pacific Solution".' Here's a page bringing the news, marking the end of a dark chapter.

23 March 2008: About the Bali bombings and a refugee family - Everyone knows there were 88 Australian victims in the Bali bombings, but just a few know the unfolding details of the story of someone locked up in Woomera who lost his Indonesian wife, and who, while locked away from seeing his two small children, had to wait for justice for more than another year. Here's the story of that justice slowly unfolding and Project SafeCom's role in that unfolding.

30 March 2008: Labor abandons its 'small' Excision Zone and chooses John Howard's radical version - 'Refugee advocates have accused the Federal Government of abandoning its softer approach to asylum seekers after Immigration Minister Chris Evans said he was yet to decide whether Labor would reassess the status of 4600 islands 'excised' from Australian territory for the purpose of immigration law.' This page follows the debate.