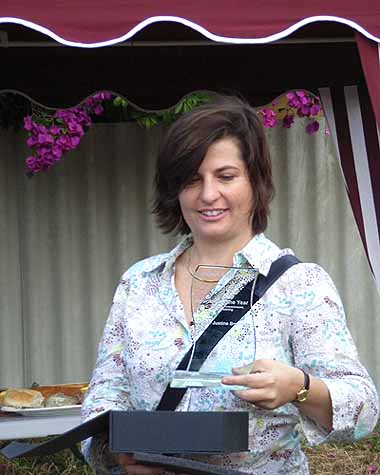 When believers in a cause get together, there's love.

Many of these people have just assisted in small ways, from helping out with simple tasks before, during and following our events.

Other people have taken on one specific task and have been persons responsible for one specific job throughout the year, or for a period spanning several years.

During our small backyard 2006 Christmas wind-up gathering at the Scott Street house in South Fremantle (see the photos below), we took the opportunity to honour one of our volunteers, our former secretary Justine Brosnan.

For a number of years since 2003, Justine was part of our organisation, and while she has since resigned from the Project SafeCom Steering Committee, she was also active as our Shipping manager: that's the person who processes all book and product orders that arrive from the website.

Volunteer of the Year Trophy

So, to establish the role of volunteers who work for Project SafeCom, we awarded Justine the 2006 Volunteer of The Year Tropy. She holds that Volunteer Tropy (click to open) until it is awarded to another person in the future.