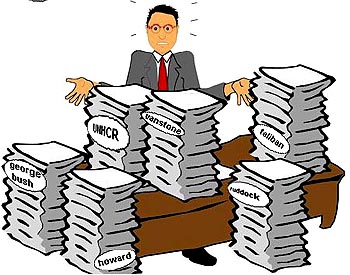 a story about The Refugee Review Tribunal

What if a one bureaucrat's decision determined whether your family will cliff hang indefinitely in legal limbo not knowing if eventually you are going to be able to enjoy life and freedom or be condemned to harassment, trauma and maybe death? This situation faces many refugees on Temporary Protection Visas in Australia.

Until recently, despite educating myself to refugee issues, I've had little understanding of how the Refugee Review Tribunal (RRT) system works. What I've learned is that it behooves all of us to be aware of the policies being made in our name and to watch how they are carried out. The person on the receiving end of a bureaucratic decision could be YOU.

Note: Names and places in this story have been changed

Nearly two years ago I became a Mum and "Arjay" (Afghani for grandmum) to a darling Hazara family who live an hour from me. The 27 year old dad and 24 year old mum have struggled to be positive and to maintain a semblance of normalcy in spite of surviving in the limbo of a Temporary Protection Visa. For three years they have coped with the uncertainty of what will happen when their TPV expires. Now that the expiration is imminent, their coping abilities are eroding.

Their appointment with the Refugee Review Tribunal member is on the 14th of this month. Everything in their lives now revolves around this date, and the worry is becoming palpable. This is a bright, naturally cheery family. The three peppy, curious, cuddling and massively energetic children have come into my home and easily interacted with many friends over the last two years.

Amin, the dad, told me on the phone tonight that he took Abdul, the six year old, to a psychologist this afternoon. Abdul is worrying about the RRT decision. Abdul, the fearless fisherman, has become scared. He fears that the Taliban is going to come over to Australia and get him. He is now afraid of the dark and of going to the toilet. The psychologist had him draw a picture of the Taliban, and Abdul drew a gun.

Amin, who has always impressed me with his ability to bring himself back to the moment, and who readily admits that worrying isn't changing the situation, is now unable to think about anything else. He can't sleep at night. Two weeks ago he was driving his car, thinking about the RRT meeting, and he had an accident. He is most peaceful when he takes the children to the nearby park, but as soon as he's back in the flat, he starts to worry. Pregnant Soroya, whose baby could well be born on the 14th, also worries.

As they are the first local family to receive their letter and their meeting date with the RRT, all in the Hazara community are closely watching what happens.

Rules of the Hearing

The below list details the RRT hearing procedure. I have verified these facts with Amin's lawyer.

I was at the RRT hearing for Amin and Soroya yesterday. The Tribunal member who conducted the hearing seemed very hostile from the beginning. He spent 3 1/2 hours interrogating them. To me, sitting unable to comment in the background, it was dreadful, so what it must have done to our lovely friends, I can only imagine. Soroya was sick and completely exhausted and Amin could hardly think by the end. His head ached and he just could not understand what the man wanted.

The man suggested most insultingly and very unpleasantly that they were not Afghans at all, had never been in X village in their lives, and threatened to declare section something or other which, thank God, Clint Jones, their lawyer, could tell us meant he was saying they had lied about who they were and where they were from.

I could not intervene but I knew the situation was the result of a poor interpreter not explaining what Amin was telling him of their home village, their district and surrounding areas. As I know them so well and have heard all their history, I realized that the Tribunal member had the state and the city of X mixed up. He continued to berate Amin for not helping, not being able to describe his home area, and not knowing anything about Afghanistan at all. I could see the interpreter was only repeating a very little of what Amin was saying and managed to get a quiet message to Clint Jones to get Amin to call a break which he is entitled to do.

I told Amin to just say one short sentence at a time and wait for the interpreter to translate that before going on. I also told him what he needed to explain to the member and Clint Jones also got the picture of what was happening and when we went back in he explained the problem to the member.

Things calmed down a bit and the wretched man withdrew his dreadful insulting hostile interrogation methods and seemed to believe Amin actually was who he claimed he was. Clint suggested we get a map and have Amin highlight all the places he had named and this was agreed but as it was a video hearing, this had to be done after the hearing and faxed to Melbourne where the hearing was videoed from.

Soroya was very brave and very strong in the little evidence she gave and I do believe it finally made a difference to the wretched man, who spoke almost kindly to her of his being a father and being able to understand how dreadful it must have been for her and must still be. She was the one who convinced him that the Taliban were not just people from outside the country who have now left, but their own Pashtun neighbours, people they knew all their lives, people who are still there and would be just as dangerous for them now if they were sent back as they were when they fled.

The Tribunal member had no idea what the Taliban was really about and was astonished that Soroya knew the people who had traumatized her and Abdul the day before they finally fled the village. He could then see why they were saying that no matter who is in the Afghan government, no one can protect them from those neighbours who would not want them alive to testify to any future government about the torture and trauma they had inflicted upon the Hazaras of Amin and Soroya's area, and they would especially loathe people who were returning from a Western country where they had learned all about human rights, democracy etc. As Amin explained to him, the present Afghani government is not powerful enough to protect people like themselves in small villages, remote from the capital and remote from any security forces.

Clint Jones is hopeful we may get a positive decision after all the dreadful insults that took up the first two hours of the hearing and, if not, he is certain the Federal Court who have to listen to a tape of the hearing, will throw out any negative decision simply on the manner in which it was conducted. Tribunal members are not allowed to treat people the way he treated Amin and Soroya. It reminded me of a cop show on TV and criminals being harassed by thug police officers.

Despite the dreadful interrogation, I am now hopeful we will have a win either at this stage or from the Federal Court down the track. It has taken a huge toll upon Soroya and Amin, especially Soroya and I am so glad I was there for them and so glad I found them a lawyer. Your support has meant so much to them. I pray we will finally see justice and a safe future for this little family in time for the new baby to grow up here an Aussie.