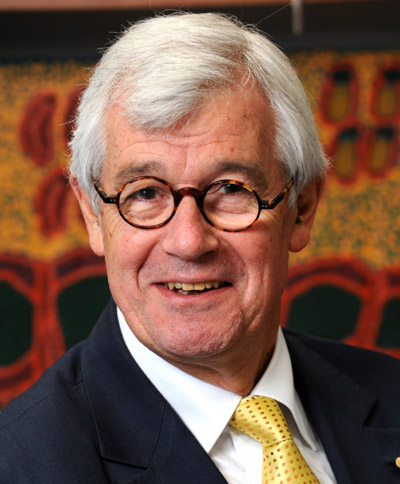 Since the 2001 MV Tampa scandal, Melbourne barrister Julian Burnside has been a vocal and outspoken opponent of Australia's hardline asylum seeker policies. Working from a universal human rights perspective, he has spoken at numerous refugee advocacy forums and has maintained a busy not-fo-profit agenda, representing asylum seekers in the courts and maintaining a no-nonsense and simple role of informing and educating people about asylum seeker rights and decency.

Narrogin, Western Australia - In Australia it is ANZAC Day 2004, 25 April 2004. In a few hours Julian Burnside QC and Eric Vardalis will board the only aircraft in the fleet of Air Nauru on the way to the 'Pacific Solution Centre'. They will launch a legal challenge in a Nauruan court against the detention of asylum seekers on behalf of Australia by the bankrupt nation.

UPDATE (27 April 2004): On boarding the aircraft, the lawyers were stopped and told their visas were withdrawn.

Recently, Burnside spoke at a Rotary Breakfast in Melbourne. In this speech, in the presence of Immigration Minister Amanda Vanstone, he accused her, the former Immigration Minister Philip Ruddock, and the Prime Minister John Howard, of committing 'crimes against humanity' for it's "Pacific Solution".

The full text of the speech is posted on our website here.

So, on the occasion of the start of the Nauru courtcase, one of Burnside's more significant cases against the Howard government's continuing oppression of asylum seekers, we edited his Melbourne Rotary speech into a handy, printable booklet of about 25 pages.

It was a full house when Julian Burnside QC, one of the most vigorous opponents of mandatory detention, went face to face against Immigration Minister Amanda Vanstone at a Rotary breakfast in held at the RACV Club in Melbourne this morning. It was an extraordinary debate as Burnside directly accused Vanstone of crimes against humanity but the Minister failed to respond.

Burnside's argument was that in 2002, along with more than 80 other nations, Australia acceded to the Rome statute by which the International Criminal Court was created. This permanent court has jurisdiction to try war crimes, crimes against humanity and crimes of genocide regardless of the nationality of the perpetrators and regardless of the place where the offences occurred.

Australia has introduced mirror legislation into the domestic law so, for the first time since Federation, Australia now recognises genocide and various war crimes. Burnside argued that Australia's system of mandatory, indefinite detention satisfies each of the elements of that crime and that The United Nations Working Group on Arbitrary Detention has found that the system violates Article 9 of the ICCPR.

With Vanstone listening intently just metres away, Burnside then said the following:

"If moral arguments have no purchase, it remains the fact that our government is engaged in a continuing crime against humanity when assessed against its own legislative standards. I accuse Mr Howard and Mr Ruddock of that crime."

"I accuse Senator Vanstone of that crime. I expect that they will ignore this accusation, since the only person who can bring charges is the Attorney General of the Commonwealth."

Amazingly, Vanstone then rose to her feet and spoke for a few minutes without once trying to rebut or defeat this rather extraordinary claim by Burnside. The silence was deafening.

2 April 2008: Julian Burnside: Citizens' rights and the rule of law in a civil society: not just yet - Julian Burnside delivers The 2008 Manning Clark Lecture: "Personally, I would have preferred to see the [Howard] Government removed because of its lamentable approach to human rights and the rule of law. But perhaps Australia is not ready to embrace such notions: not just yet. In any event, the electorate saw industrial relations as a more pressing matter."

28 August 2006: Five years on, the Tampa drama continues - As SMH investigative reporter David Marr shows, the drama continues, now in the private lives of those refugees who eventually made it into Australia, and barrister Julian Burnside QC gets challenged by Australians on a public Blog.

With your mouse, right-click and choose "Save As" to download the small file with all pages to your computer.

Below is a visual representation of all printed pages, laid out in the pairs that should be printed on the six A4 sheets you need in your printer. Enjoy!