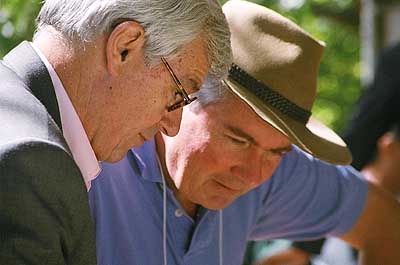 Julian Burnside QC and Fr Frank Brennan, quietly scheming together in a quiet corner of the Manning Clark House gardens, for a better and different Australia?

All photos of the April 2007 Manning Clark event are by Freddie Steen, volunteer worker at the Romero Centre, Brisbane QLD.

The conference, well attended by a couple of hundred people, featured a large number of high profile presenters associated with the refugee lobby. There are several pages about this 2007 Weekend of Ideas, and all other pages are listed and linked below.

7 May 2007: Making sense at Manning Clark House - Some material presented or published following the Manning Clark House 2007 Weekend of Ideas: the SIEVX presentation by Tony Kevin in the media segment, the Agreed Statement of Principles issued by the Conference, and a Canberra Times article by John Warhurst.

28 March to 1 April 2007: Canberra in March 07: two significant events in one significant week - Manning Clark House's Sixth Annual Weekend of Ideas: A Fair Go for Refugees?, a Talk and Dinner with Project SafeCom's Jack Smit, and a significant week of Parliament with both Houses sitting for the last week before this year's Easter recess. Make sure you're there!

Name labels with the images are all probably 'mostly correct', but let us know if there are any errors! Click on the thumbnails to open the large versions in a new window.