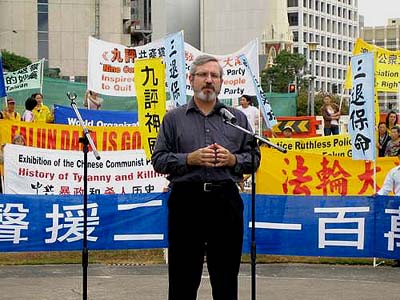 Image: Andrew Bartlett speaks at a rally in Brisbane in April 2007 supporting 21 million Chinese people who have quit the Chinese Communist Party.

25 years of keeping the bastards honest

"From 1987 to 1998 the Democrats moved 43 amendments to Migration Legislation Amendment Bills attempting to protect the rights of refugees and the spirit of our international obligations."

"In 1998 Andrew Bartlett (QLD) spoke over 100 times in the Senate on the topic of refugees: moving amendments, opposed legislation, seeking to have regulations disallowed and advocating on behalf of refugees in Australia."

Summary of the Democrats'
approach to refugee policies 1977-2002

For twenty-five years the Australian Democrats have adhered to our core principles of social justice and human rights. We have fought for human rights on many levels including working on individual asylum seeker cases, opposing cutbacks to the rights of refugees and fighting for legislation, which would ensure a fair outcome.

In 1977 Don Chipp's catch cry as he spoke at public meetings towards the formation of a new Party, was "Tolerance, honesty and compassion" and this was reflected in the policies adopted on refugees.

The first policy on Population, Immigration and Ethnic Affairs stated:

"The plight of refugees of all kinds will be regarded as quite a different matter to any migration plan, and will be given compassionate consideration, responding to and working with the activities of the United Nations."

This policy support family reunion as a priority within the migration program. It also reflected an ongoing concern of the party regarding an ecologically sustainable population.

At the launch of the Australian Democrats campaign for the federal election in December 1977, Chipp said:

"We will show compassion and give all possible assistance to refugees."

From their formation, the Australian Democrats recognised multiculturalism and supported the provision of education and other services to enhance its enrichment of the Australian community.

In the late 1970's the issue of South East Asian refugees became a major political issue. The Democrat National Journal included letters on the issue that report that only 7% of the Australian population supported taking more refugees.

By 1984 Don Chipp was warning of an anti refugee feeling arising in Australia and actively encouraged by the Coalition. During debate on the Australian Citizenship Amendment Bill, he said "Debate comes at a time when race has become a central issue in Australian politics" Chipp warned that unless the immigration debate was carried out with moderation and respect for all points of view "Australia would become an ugly place to live in."

In 1986 the then Leader of the Opposition, John Howard, made remarks that Australia should cut back Asian immigration. He was attacked by Jean Jenkins (WA) in the Parliament, who confirmed the Democrat's commitment to a non discriminatory immigration programme and advocated raising the refugee programme to 15,000 per year.

Also that year Sid Spindler (VIC) challenged a government immigration program which cut out funding for travel in the special humanitarian programme relying on the community and individuals to fund accepted refugees travel to Australia.

Over 1987 and 1988 the Democrats moved 43 amendments to Migration Legislation Amendment Bills attempting to protect the rights of refugees and the spirit of our international obligations.

In 1988 the Democrats took up the cause of Irian Jaya refugees in detention in Vanuatu and Michael Macklin (QLD) advocated Australia should grant them Refugee Status.

When the Democrats' Immigration policy was re-ballotted in 1989, again there was an emphasis on services for new arrivals, and low general immigration levels, but with separate consideration of refugee numbers:

"Annual immigration and refugee intake quotas must be considered separately since the refugee quota relates to factors external to Australia, to Australia's ability to respond to specific international crises and to our obligation to assist those members in the human community who are in the direst needs."

In 1989 The Democrats supported a heavily amended version of two Migration bills, originally intended to remove much of the discretionary powers within the act to lower the number of appeals made in court. The Democrats proposed 43 amendments to the Migration Legislation Amendment Bill alone.

In 1991 there was a win when the Democrats and ALP combined to defeat a Coalition motion against changes to regulations, which the Opposition argued would advantage homosexual couples applying for migration.

In 1992 the Australian Democrats opposed the introduction of mandatory detention, the limiting of judicial review and the restricting of the rights of asylum seekers to apply for protection. All were passed with the support of the ALP and Coalition.

The Migration Amendment Bill 1992 introduced mandatory detention for people arriving in Australia without a visa. The bill was a response to the arrival of 37 Cambodian boatpeople, who were in court during the Senate's debate over the bill. The Democrats expressed serious concern over the timing of the bill, asking that debate be delayed. The Democrats argued that the bill should be considered after the court had handed down its decision regarding the Cambodians, who claimed they had been illegally detained after arriving in Australia. The ALP and Coalition in the Senate, however, voted in favour of proceeding with debate of the legislation, arguing the executive, not the judiciary, should decide when people should be detained and released from custody.

John Coulter (SA) also expressed concern over the conditions of Port Hedland, which was to be the designated detention centre for asylum seekers.

In 1994 the Australia Council of Churches called on the Government to consider covering the travel for accepted refugees under the humanitarian programme, a call the Democrats supported.

In 1995 the Government passed migration legislation to prevent Vietnamese refugees who had resettled in China, applying for protection visas. The Democrats were strongly opposed to this bill, primarily because it contained 'non-compellable discretion' for the minister or Department.

In 1996 we voted against legislation that denied information on legal rights to asylum seekers in detention, unless they specifically made a direct complaint to HREOC.

In 1998 Andrew Bartlett (QLD) spoke over 100 times in the Senate on the topic of refugees: moving amendments, opposed legislation, seeking to have regulations disallowed and advocating on behalf of refugees in Australia.

One migration bill passed this year by the Coalition and ALP strengthened the Minister and Departments' ability to deny visa's on grounds of 'bad character', reversed the onus of proof in relation to character, limited the time for the process of review by the Administrative Appeals Tribunal, and allowed the minister or department the ability to set aside decisions of the AAT or cancel a visa when it was not in the 'national interest'.

In 1999 Bartlett successfully moved a motion to prevent the Government making it more difficult for parents to migrate to Australia by requiring them to pay a fee of $64,000 to be eligible for a Visa.

Some of the other motions he moved that were unsuccessful sought to prevent the introduction or increase in fees for refugees to appeal decisions.

The Australian Democrats led the fight against the introduction of temporary protection visas for unauthorised arrivals. Bartlett expressed the Democrats' abhorrence that a policy for temporary visas for refugees that had been widely condemned when proposed by One Nation a few years earlier was now supported in the parliament by not only the Coalition but the ALP as well.

In 2000, the Democrats opposed the amalgamation of review tribunals on the grounds that this would disadvantage refugees.

In 2001 - an election year - the battle over the rights of refugees escalated. The Australian Democrats fought a lonely campaign in the Parliament advocating the rights of refugees and opposing seven migration bills designed to remove Australian territory from the migration zone, restrict access to the Courts, introduce mandatory sentencing for people smugglers, strip searches of asylum seekers in detention and implement the policy of turning refugees away from Australian waters and physically forcing them to return to Indonesia.

The Democrats also opposed legislation which excised certain asylum seekers from the migration zone for at least six months.

The Australian Democrats have instigated and participated in many Parliamentary Inquiries into Australia's policy and practices towards refugees, including the Senate Inquiry into the operation of Australia's refugee and humanitarian program in June 2000, a Report on visits to Immigration Detention Centres , and the current Select Committee Inquiry into a Certain Maritime Incident which is investigating allegations made by the Federal government during the 2001 Federal election and the detail of the expensive and inhumane Pacific Solution.

The Australian Democrats have a proud record of publicly speaking out for refugees at rallies, conferences and in the media. Our Senators have campaigned against mandatory detention, the 45 day rule which deprives asylum seekers of access to social security or work rights, temporary protection visas, restrictions in access to courts and the Pacific Solution. We have worked tirelessly for equal rights and opportunities for asylum seekers and refugees, advocating that welcoming and supporting refugees will bring long term benefits to the Australian community.

Unfortunately over the years we have not been able to prevent the ever-increasing swing towards restricting access to the courts, to independent review and community infrastructure, which would assist refugees with settlement. Our role however in supporting refugees individually, within the community and legislatively remains invaluable, as do our efforts at shining the spotlight on the flaws in the policy approach of Liberal and Labor and being a voice for the powerless people who are refugees.

The Democrats oppose mandatory detention for all unauthorised arrivals.

In 2002 Natasha Stott Despoja (SA) and Andrew Bartlett visited Woomera at the request of detainees and met with them. The senators reported that the Government's insistence on locking up all unauthorised arrivals for prolonged periods of time is causing immense and unnecessary suffering to people who have often already endured an enormous amount.

Australia is one of the few countries in the world that compulsorily detains all unauthorised arrivals indefinitely. This policy was introduced by the ALP when in Government, and has been supported by both the old Parties since that time, leaving the Democrats as the only Parliamentary Party repeatedly calling for alternatives.

The Democrats believe that, while their claims for refugee status are assessed, families should be in group homes outside of detention centres and unescorted minors should be in the care of community and welfare agencies.

There will be a lower financial and emotional cost if most asylum seekers are released into the community, as occurs in many other countries.

The Democrats opposed the introduction of Temporary Protection Visas for genuine refugees. That bureaucratic and emotional time bomb is rapidly ticking down. There are uncertain futures for genuine refugees who have lived in the Australian community for the last few years.

The Democrats opposed the Border Protection Bills the Government passed (without due consideration) late last year, to repel asylum seekers on the high seas.

In their 25th year the Democrats continue to support a non-discriminatory immigration program that gives priority to refugees and family reunion applicants.

Today the Democrats still strongly support multiculturalism and believe all of us have a part to play in building a strong, safe, harmonious and prosperous society.