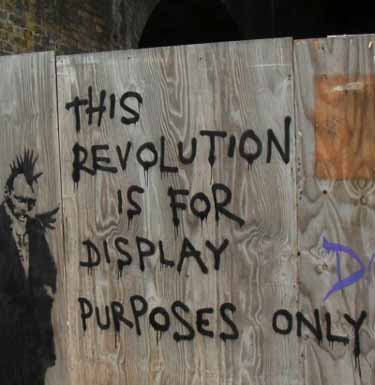 "An academic friend in WA ponders about working in a developed country - to presumably return when Australia has been fixed, but he also acknowledges that the shift in politics that has enabled what happened, is a worldwide trend, and that the changes are a worldwide issue."

"Others have become silent, and may have given up altogether."

"Margo Kingston is still recovering and on holidays, but she says, in words to that effect:"

"Don't go overseas, your country needs you, now more than ever!"

18 October 2006: The Project SafeCom Blog Archives - This is the page that brings together all entries from our Blog. They are manually entered, so please accept apologies if sudden and new entries are not posted to this page immediately.

16 October 2004: The Blog Feeds for Newsreaders - Our Blog Feeds are capable of being read by the Firefox' Live Bookmarks. This page displays the most recent Blog entries, and links to all Blog items just below that. It also explains some things about the techno-side of News Syndication using RSS Feeds.

29 September 2004: Member for Chisholm Anna Burke contradicts refugee policy - ALP backbencher Anna Burke has contradicted her party's policies on refugees, saying that asylum-seekers should be released from immigration detention after health checks. Ms Burke also said that asylum-seekers should be entitled to work in the community and to receive Medicare, while awaiting the outcome of their claim for refugee status.

15 August 2004: About Ruth Cruz: Sue Mackay, Labor Senator for Tasmania - "The matter that I want to bring before the Senate tonight is the plight of a young Tasmanian woman, Ruth Cruz. It is not strictly true to call Ruth a Tasmanian because, to date, she has not been officially granted that status. Officially she has not been, but certainly unofficially, by the people of Tasmania, she has."

15 August 2004: Labor's Lindsay Tanner, Member for Melbourne - "Labor's support for the Howard Government's brutal approach to asylum seekers in the 2001 election was the most traumatic experience of my political career. Labor's capitulation to the tactics of group vilification and racial discrimination in 2001 may be forgiven, but should not be forgotten. That battle can't be fought again, but Labor can learn from this terrible episode. Labor must never again allow itself to be forced to jettison fundamental values in pursuit of political survival."

15 August 2004: Craig Emerson MP: confronting wedge politics head-on - "Ultimately [John Howard's strategy] comes down to this: splitting the nation in two and picking up the bigger half. These are the tactics the Liberals imported into Australia in the lead-up to the 2001 election. Now they're at it again, casting around for a racially or socially divisive issue."

15 August 2004: Tanya Plibersek: A contribution to Politics in the Pub - "Perhaps the most racist local campaign I saw in the last federal election was in the Tweed, Larry Anthony's seat. Larry Anthony's campaign literature said: 'Labor has a secret plan to release refugees from detention centres. They will be looking for low-cost accommodation and will be housed in the caravan parks of the Tweed'."

15 July 2004: Senator Kate Lundy addresses Labor for Refugees - "During the 2001 election campaign Labor, we have to admit this now, was caught flat-footed and fell into a trap. We couldn't believe that any leader could be so malicious, so destructive, so fundamentally wicked as to be willing to go to such lengths. At the time we didn't see the putrid core of Howard's agenda. We learnt this when we heard what they were saying inside their war rooms."

10 July 2004: 2004 Election: Welcome noises from some Labor MP's - This page, like several other pages in this series constructed in the lead-up to the 2004 Federal Election, lists some communication from Labor candidates and MP's in relation to our election platform. There are statements from Eden-Monaro's candidate Kel Watt, the Member for Grayndler Anthony Albanese, Nicola Roxon, the Member for Gellibrand, and a news item relating to the Hon Kim Beazley, the Member for Brand.

1 July 2004: Greens in the House of Reps: Michael Organ for Cunningham - Michael Organ MP was the Australian Greens Federal Member for Cunningham between 19 October 2002 - 8 October 2004. "Compassionate treatment of asylum seekers - who are now rather coldly termed illegal non-citizens - has gone out the window, and all the forces of the federal government - administrative and legal - are being railed against them."

1 July 2004: An Activist in Parliament: Kerry Nettle of The Greens - Kerry Nettle is The Greens' Senator for New South Wales. Senator Nettle has been instrumental in developing The Greens response to the Howard government's anti-terrorism, 'security', and War-related legislation - and has been working relentlessly in her diverse portfolio, not afraid to oppose the major parties when it needed to be done. This is her politician's page on our website.

1 April 2004: Snippets about asylum policy: the Good, the Bad and the Ugly - Some short election campaign 'evidence snippets' relating to asylum seekers by Australia's Conservative politicians as well as some pretty decent small-l Liberals and the Independent for Calare, Mr Peter Andren MP. The statements and snippets were all collected in the lead-up to the 2004 Federal Election.

15 March 2004: The Democrats and refugees, 1977-2002 - "For twenty-five years the Australian Democrats have adhered to our core principles of social justice and human rights. We have fought for human rights on many levels including working on individual asylum seeker cases, opposing cutbacks to the rights of refugees and fighting for legislation, which would ensure a fair outcome..."

15 March 2004: Concluding Statements, A Certain Maritime Incident - The reality of the inquiry into the children overboard affair is that at best there are inconsistencies and contradictions in the evidence given before the Senate Inquiry by the most senior of Defence and PMC officials. At worst there are fundamental omittances, half-truths, untruths and cover-ups.

28 February 2004: Backbenchers: slow lessons in Welcoming the Stranger - It's January 2004, the year of the next Federal election after John Howard's 2001 Tampa 'dark victory', and slowly, hesitantly, a quiet chorus of Liberal and National backbenchers are whispering that refugees are good for Australia, good for the economy, and good for many things: John Forrest, Petro Georgiou and Patrick Secker, while Kay Hull also joins the fray.

25 January 2004: Melville Island Kurds: Another 'truth overboard'? - "The Howard Government's handling of the boatload of Kurdish asylum seekers who landed on Melville Island 11 days ago has all the elements of the "children overboard" affair of the 2001 election campaign," writes Michael Gordon in The Age, while Tony Abbott tries to justify John Howard's asylum strategies and gets a serve for it by Burnside QC.

5 January 2004: 'Boat People are Queue Jumpers' and other statements rebuffed - These are really "John Howard's Myths", keenly peddled by Immigration Minister Philip Ruddock, the front bench as well as many backbenchers from the 2001 election onwards. Here they are rebuffed by the Edmund Rice Centre.

1 January 2004: A few Good Women and Men - this page, part of our 2004 election pages, features the voices of a selection of Members in the Federal Parliament and Senators who have an outspoken voice, who have an independent opinion and who have a view on what could and should be very different ina better Australia.

15 December 2003: Parliament for Refugees: Those who dare to break the silence - This page contains the list of sitting parliamentary representatives in the current government term. As time slowly moves towards the 2004 election, Members will have links to statements they have made about the Howard government's treatment of asylum seekers and refugees.

15 December 2003: Senators for Refugees: Those who challenge, block and disallow - This page shows the list of all senators in the Australian Senate in 2004, and - replacement - candidates for the election. As time slowly moves towards the 2004 election, the Senators will have links to statements they have made about the Howard government's treatment of asylum seekers and refugees.

15 December 2003: Our 2004 Federal Election campaign: a template for human rights? - We formed our election campaign around trying to compose a platform of quotes, statements, speeches and articles from all Australian Federal Parliamentarians, both Senators and Members of Parliament. All statements needs to include opinion or statements by these politicians themselves about refugees and asylum seekers. So we wrote to everyone in Federal Parliament, asking for material we could use.

15 December 2003: Project SafeCom's 2004 Federal election platform - "Because ALL boatpeople who arrived at Australian shores in the last decade or so, came to ask for asylum, a claim they are rightfully allowed to make under the UN Convention, calling them 'illegal' is in our eyes equivalent to peddling lies on the part of the Howard government, and by others who parrot the current policies".

15 December 2003: The Greens: A Rock of Security in the Senate - Bob Brown's 2001 National Press Club Address: "Today, Mr Howard and Mr Beazley's parties are working in the Senate to ram through 7 bills cutting not only the rights of asylum seekers but of those Australians who want to help them. The bills overrule access to the courts, bring in mandatory..."

8 December 2003: 'Old' Mark Latham: defender of mandatory detention - When pressed by Project SafeCom to reveal his sources for this stark claim, the Member for Werriwa Latham Latham wrote us back, stating that 'government sources' claimed this, however, he did not reveal his source - and we told him we weren't too happy with this: his figures were topsy-turvy from what the rates really were...

16 November 2003: Full list of 1998 - 2001 Federal marginal seats by State - This is the full list of Federal electorates, grouped by State, that were marginally held by Labor or the Liberal-National Coalition parties in Australia. It helps you with your lobbying efforts!

1 July 2003: The struggle for Labor, the trouble with Labor - The draft proposal reprinted on this page, written by a Labor for Refugees branch member, gives a striking snapshot about what was largely absent from the newsmedia reports at the time, and still absent from the public debate: the fierceness of the struggle within Labor.