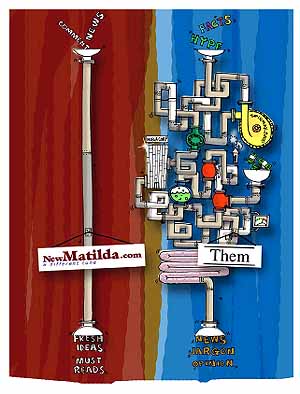 The recently established online magazine NewMatilda.com is a fresh face amongst new and independent media. From the mandate printed on its website:

"Two areas of immediate policy interest flow from the last elections. The first is how our community can be more engaged and involved in our institutions, particularly our political parties, corporations and civil society. How can we build a sustainable democracy and promote community participation?

The second area is the media. It is tightly controlled. 'Spinners' manufacture consent rather than engage us in open and meaningful debate."

The catastrophic world events of a major earthquake, followed by tsunamis that resulted in hundreds of thousands of deaths, during and after the Christmas weekend of 2004 provided an opportunity to express concerns about our expectations for further disaster. We took that opportunity. NewMatilda.com took it on board.

11 March 2006: Burning Coal and burning the planet - The Australian Labor Party has just released its environmental policy blueprint, and on the face of it, the policy looks 'half decent', but, as always needs to be asked, is the ALP policy all it's stated to be? And, how vulnerable is the stated target of cutting greenhouse gas emissions by 60% by 2050?

5 March 2006: Silencing the climate change prophets - ABC Four Corners lifts the lid off government gagging of those who know and should tell us. "Some scientists believe that there'll be more environmental refugees. Is that a possibility?" - "I can't really comment on that..."

15 September 2005: Friends of the Earth Australia: A Citizens Guide to Climate Refugees - While the Earth has always endured natural climate change variability, we are now facing the possibility of irreversible climate change in the near future. The increase of greenhouse gases in the Earth's atmosphere from industrial processes has enhanced the natural greenhouse effect.

Changing worlds: the coming of envirogees

This is an edited version of an entry on the Project SafeCom Blog. It also appeared in this form at the New Matilda online magazine.

They will be on the move by the many thousands. They will be coming in boats, in trucks, on trains - and in lorries, in aircraft wheel housing spaces, crouched on planks under trains, and in goods containers, if we don't assist them. In the last week of 2004, when undersea earthquakes followed by tsunamis seriously impacted on countless local communities, the entire world was given a wake-up call which none of us can afford to ignore.

There were precursors of the 2004 tsunamis. The last decade saw several serious imbalances of the earth's weather patterns. During 1998, I kept a daily tally of all reported natural disasters and their impact on the world community, of lives lost, people displaced and injured - not including wars or internal conflict, I counted an estimated 2 247 000 fatalities, and around 151 million people injured and affected in several ways - from injuries to loss of house or habitat.

In Australia the solution is easy and familiar. We will need to start by building at least 1800 copies of the Baxter detention centre. No problem: they will all fit into the vastness of our Outback, far and far away from interference from the courts and from the human rights lawyers with bleeding hearts.

Then, we will need to increase the National Budget at least ten-fold - and that's just a start - to provide vessels mandated by Operation Relex, John Howard's Deter and Deny Refugee Repellent Army to swarm the Indian Ocean. We will need to increase staffing of the Immigration Department, let's say by 1200%, spend billions more on legislative extensions, establish a Migration-only Court not open for review by other courts instituted in Australia, to ensure processing does not drag on for more than just a few weeks.

Then, we will need to employ the strictest of guidelines, such as applying for asylum using English-only, and submitted on the right form issued by the Department of Immigration, making claims void immediately if asylum seekers who make it through the Repellant Army's barrier talk about something else before they express that Internationally Recognised Sentence: 'I desire to seek asylum.'

Or - we can do something different.

We could start by acknowledging that the First Law of Globalisation should recall the age-old dilemma of Cain and Abel. We are our brother's keeper with no holds barred, especially if the entire world is engulfed in a drama of epic proportions, and even more so if we claim Globalisation as our paradigm. And on a planet where borders have become irrelevant in many respects already for the movement of goods and the movement of capital, if not for people, we will have to move towards an elimination of hardline exclusions and find a way to welcome people caught up in these dramas. The moves taken in the week following the devastating effects of the tsunami are heartening in many ways: the world community has rallied, financially and in-kind, to the aid of millions of victims who are affected by the disaster.

Of course, while George W Bush and John Howard have signalled moves to form a rather grandiose alliance with Australia, Japan and India to coordinate relief, the Bush Administration's financial and other aid remains an expression of the fact that the USA under Bush is more interested in spreading its hegemony than in playing its role as an equal partner in this drama. But the world will learn this lesson fast, I expect. If Bush does not become more intelligent in his approach to many issues, there will be a full-scale rejection of the stupidity and blindness of a president only interested in American domination of the world stage.

While local, regional and State communities in Australia, as well as the churches and aid organisations have excelled in their rushing to the aid of the ten stricken nations, the United Nations' emergency relief coordinator, Jan Egeland called the initial overall aid efforts by rich Western nations "stingy." And the New York Times, on Christmas Eve, observed that:

$35 million remains a miserly drop in the bucket, and is in keeping with the pitiful amount of the United States budget that we allocate for non-military foreign aid. According to a poll, most Americans believe the United States spends 24 percent of its budget on aid to poor countries; it actually spends well under a quarter of 1 percent. [1]

The link between earthquakes and global warming and the ensuing pressure on the earth crust, whether it is our populated or remote landmass or the ocean floor is now widely accepted by scientific opinion. The public are also increasingly aware of the link. Gordon Drennan from Burton SA in a recent letter to the Editor of The Age wrote:

It is no coincidence that a Richter scale 8.1 earthquake near Macquarie Island between Tasmania and Antarctica was followed just days later by the catastrophic one in the Indian Ocean off the Aceh coast. Both are on the boundary of the India-Australia tectonic plate, and shocks and stresses from the first would have contributed to the one that followed. And a factor in the Macquarie Island earthquake would have been the redistribution of load on the planet's crust as Antarctic ice melts due to global warming. As the climate warms, and more Antarctic ice melts, the countries on the boundary of our plate - New Zealand, New Guinea, Indonesia and southern Asia - can expect more and bigger earthquakes. [2]

Or elsewhere in a discussion of the relationship between glacier melt-down and earthquakes in the Alaska region:

Alaska is seismically active because a North Pacific crustal plate is ramming into southern Alaska, creating pressures that must be relieved at some point. However, these pressures do push up high mountains where glaciers form - and the weight of the glaciers pushing down can stabilize the situation, if not eliminate the risk altogether. Remove that weight, and the likelihood of a quake goes up as the strain accumulates. (....) Photographs show how glaciers in the fault area had thinned substantially during the 80 years since the previous earthquake activity. [3]

In the New Statesman of May 2004, Mark Lynas mentions similar findings:

In the pre-industrial era, levels of carbon dioxide per cubic metre of air stood at roughly 278 parts per million (ppm). Today, they have soared to 376ppm, the highest in at least 420,000 years, and probably much longer (....) if the current rate of carbon accumulation continues, the rise in temperature could be as much as 6 Celsius by the end of the century, according to the UN Intergovernmental Panel on Climate Change (....) according to a paper from the Benfield Hazard Research Centre (....) the impact of methane hydrate failure could be very dramatic indeed. If enough gas is released, entire continental slopes could collapse in enormous submarine landslides, triggering tsunami waves of up to 15 metres in height - enough to level entire coastal cities. Again, there is a precedent: just 7,000 years ago, an area of continental slope the size of Wales slid downhill between Norway and Iceland, triggering a tsunami that wiped out neolithic communities on the north-east coast of Scotland.

(....) A recent report for America's military top brass warned that mass refugee flows and competition for water and food could plunge the world into nuclear conflict. "Humans fight when they outstrip the carrying capacity of their natural environment," it warns. "The most combative societies are the ones that survive." The report charts some of the "potential military implications of climate change", including the collapse of the EU, civil war in China and the takeover of US borders by the army to prevent refugee incursions from the Caribbean and Mexico. [4]

We can conclude from this that the world community, in addition to regular rushing to the aid of those whose lives are compromised by such disasters, needs also to rush to pressure governments to immediately spend time and commitment to reduce its damaging footprint on the capacity of the planet to deal with our impact on it.

Our own very survival in the world is dependent on our ability to pressure governments to enact restrictive legislation, both on the corporate world but also on its allies in other countries. Local community groups must be mobilised to pressure local, state, and in Australia, federal governments - especially via backbenchers as was learnt from the refugee movement since TAMPA.

Mobilising local communities to not only collect goods and services, funds and donations to be sent to countries affected by last week's earthquake but also to lobby representatives in State and Federal government to take the message seriously and wake up the community. Bumper stickers saying 'Stop the Envirogees: Sign Kyoto' could be the message for a start - not because I support a halt to refugee intake, or that I think that signing the Kyoto agreement is a panacea for the debacle of the environmental danger we find ourselves in. But it might be small start, and a reminder that we are going to need all the cleverness we can muster; otherwise we'll be washed away.

Jack Smit is the founder and co-ordinator of Project SafeCom Inc., a community association in Western Australia that has engaged people and politicians around Australia about refugee policy issues and treatment since the Tampa stand-off in 2001, acting as activists and lobbyists. Project SafeCom supports 'sustainable' and 'sustainability' policies that positively affect all people and the planet and it seeks serious changes in Australia, especially amongst politicians, so that policies start to reflect a direct countering of what it perceives as 'people and planetary emergencies'.