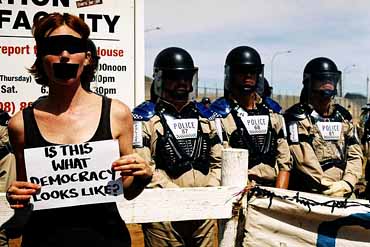 A summary of the Georgiou Bills

Legislation for an act of compassion for people in immigration detention and holders of temporary protection visas, and to reform the mandatory detention system

An outline of two Private Member's Bills to be introduced by Petro Georgiou MP, Member for Kooyong

14 June 2005: Countering the Kooyong breakout: Howard supporters and their anti-Georgiou camp strategies - Since the February speech in Parliament by Petro Georgiou, several front-benchers in the Howard government have been beavering away in an effort to control the damage.

8 June 2005: Debunking anti-Georgiou camp tactics - Myths are being peddled by A-G Philip Ruddock, Hon Peter Costello, intended to influence Mr Malcolm Turnbull and others in the Liberal-National Coalition, in what we see as an attempt to discredit the Petro Georgiou Bills. Here are the facts that debunk those myths.

18 February 2005: The Kooyong Break-out: abandoned backbenchers and 'small-l liberals' revolt - how Petro Georgiou, federal member for Kooyong, leads the quiet pack on a new trail of independence. "One Coalition senator crossing the floor after July 1 will be enough to defeat a Government measure opposed by Labor. Added pressures will come from a large back bench and the frustrated ambitions of those denied promotion."

Text of the two Bills

The full text of the Two Bills is posted at Margo Kingston's Web Diary:

In 1992 Labor introduced a system of mandatory detention of unauthorised arrivals that was intended to facilitate the making and implementation of decisions relating to them.

Since 1996, the Howard Government has pursued and extended that policy framework.

However in recent years the context for our policies has changed significantly.

In recent years, the government has acknowledged the need for greater flexibility in asylum and refugee policies. Measures were introduced to remove women and children from high security immigration detention facilities.

In 2004, new regulations permitted certain temporary visa holders to apply for permanent residence. Most recently, the 'Removal Pending Bridging Visa' was established to permit the release from detention of a small number of long-term detainees.

Nonetheless, women and children continue to be detained for extended periods while their applications for refugee status are determined.

There is no independent scrutiny of whether it is necessary to keep people detained for lengthy or indefinite periods to protect the community or to prevent them absconding.

Many holders of temporary protection visas do not have the occupational or other qualifications to be eligible to benefit from the 2004 reform, and will continue to live in anxiety and fear of being returned to places of great insecurity, still separated from their families.

Additional measures are necessary to ensure that the system is compassionate, fair, accountable and subject to independent scrutiny.

Two private member bills are proposed to achieve these aims while maintaining the integrity of Australia's asylum and refugee system.

The first is directed to alleviate as promptly as possible the plight of individuals who are suffering under the harshness of the current system.

The second bill proposes a model for reform of the mandatory detention system.

1. A bill for an act of compassion

This bill will provide compassionate measures for current long-term detainees and other groups of people who have been most adversely affected by elements of the current asylum and refugee system.

The following paragraphs describe the groups who the first bill will assist.

Pending and unsuccessful asylum seekers who have been in detention for more than a year will be released into the community, subject to individual assessment, until their status is resolved.

All those who the Judicial Assessor determines do not need to be detained, will be released, on conditions such as a requirement to report to authorities, if deemed appropriate. In order that their basic needs are met, they will be given the same entitlements as those released under the new Removal Pending Bridging Visa e.g. the right to work and Medicare.

Children and their families in immigration detention

The Judicial Assessor will also examine the cases of all asylum-seeker children aged under 18 who are currently in immigration detention, and their accompanying parents and siblings, irrespective of how long they have been detained.

Children and their parents and siblings will be released from detention pending determination of their applications unless there is a significant risk they pose a danger to the public or are likely to abscond.

Permanent residence for people who cannot be removed from Australia

A small number of people unsuccessfully applied for protection visas but cannot be removed to any other country, generally because they are stateless. Some are living in the community and others are in immigration detention.

The bill will end the situation of indefinite uncertainty for these people: if someone has not been able to be removed for 3 years after the final determination of their application for a protection visa, they will be eligible for a visa to remain permanently, with certain entitlements such as the right to work.

There will be additional requirements of eligibility. Permanent residence will only be granted to people who

If the Minister for Immigration decides to refuse to grant a visa to someone, that person can appeal the decision to the Administrative Appeals Tribunal.

2. A bill for an Act to reform the mandatory detention system

This bill replaces the system of universal mandatory detention of unauthorised asylum seekers with a targeted system of detention subject to judicial scrutiny. As well, it ends the system of providing only temporary protection visas to some people who have been found to be refugees.

If an asylum seeker arrives without a visa, they will be able to be detained initially by DIMIA for up to 90 days if it is necessary to

A detained asylum seeker will be allowed to apply to the Federal Court for an order that he or she be released because there are no reasonable grounds to detain them.

After an asylum seeker has been detained for an initial 90 day period, DIMIA may able to apply to the Federal Court for an order to detain an asylum seeker for additional 90 day periods, if it is still necessary to do so in order to verify identity, protect public safety, ensure the person is available for health checks or to ensure the person is available for removal if his or her application is unsuccessful.

People who are released from detention pending the determination of the applications will be granted bridging visas with certain entitlements to meet their basic needs, such as work rights and Medicare - the same conditions that attach to the new Removal Pending Visa.

Unsuccessful asylum seekers who are subject to removal

Pending their removal from Australia, people whose applications for a protection visa have been unsuccessful will be not be detained unless it is necessary to do so on specified grounds and detention decisions will be subject to judicial scrutiny.

Initially, DIMIA will be able to detain an unsuccessful asylum seeker for up to 90 days but only if detention is necessary in order to protect public safety or welfare or to ensure the person will be available for removal from Australia. A detained person can appeal their detention to the Federal Court.

After 90 days, DIMIA can apply to the Federal Court for an order to continue detaining someone on the grounds that

The court can order detention for 90 days recurring.

All protection visas will be permanent.

The bill ends the system of providing only temporary protection to some people who have been found to be refugees.