Online campaign group GetUp! are partnering with a range of refugee advocacy organisations including Project SafeCom to send a petition to the federal Immigration Detention Inquiry being conducted by the joint standing committee on migration. Here's the YouTube movie that's part of their campaign, and here is the page for their campaign.

Online campaign group GetUp! are partnering with a range of refugee advocacy organisations, including Project SafeCom, to send a petition to the federal Immigration Detention Inquiry being conducted by the Joint Standing Committee on Migration.

Chances like this don't come very often - to end a regrettable chapter of Australian history that caused unimaginable suffering to some of the world's most desperate and downtrodden.

The Government has launched an unexpected but long-awaited inquiry into immigration detention - the system that gave us children in detention, the 'Pacific Solution', sewn lips, the Cornelia Rau affair, razor wire and condemnation from the international community.

We believe this Inquiry signals that the Government genuinely wants to put an end to Australia's inhumane detention regime, and for the first time they are asking us for our views. If ever you have despaired at the treatment of asylum seekers, put your name to GetUp's petition submission and help end this ongoing national shame:

So many times the community has rallied against mandatory detention and finally we have been given the chance to consign it to the dustbin of history. Now we must demonstrate to the Government that we demand a humane system.

For over a decade, governments have been so concerned not to appear soft on asylum seekers that they have denied basic rights and dignity and opted for the cheap politics of fear. This is our chance to stand up and demonstrate that Australians demand decency.

Together we will show that harsh treatment of the vulnerable is unacceptable in our community. Click here to give a mandate for a future of decency and respect.

This Inquiry is a moment we've been waiting for to show that what was thought to be popular in the electorate - to be seen as harsh on asylum seekers - is something we profoundly reject. Contribute to our submission, and show the world that our better nature is stronger than our fear. Speak up today to right over a decade of wrongs. 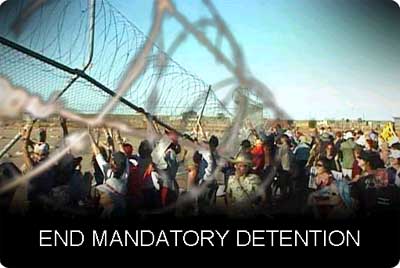 GetUp believes, along with many other refugee advocacy organisations, that the immigration detention regime should meet the following principles:

GetUp has partnered with the following organisations in this campaign:

On July 22 2008, about 28 hours since the ten-point list as above was posted, GetUp adjusted and summarised their items to show the following four items instead: 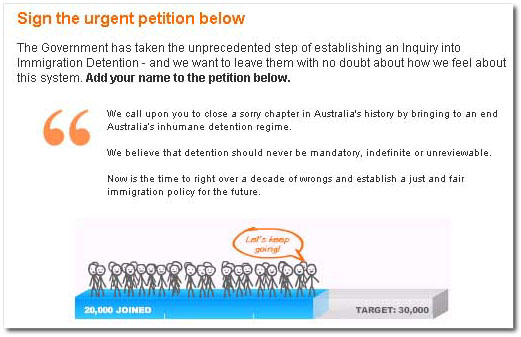