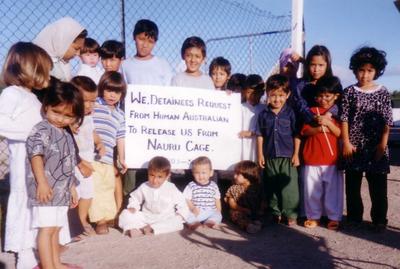 Through the Nauru Looking Glass

An article by Freddie Steen

"From the grassroots of Australian society we continue to challenge a Government that has eroded our international reputation for fairness and decency and called into question our values as a society."

A Refugee Action Collective Forum was held in Brisbane on 2 February 2004. Speakers were Senator Andrew Bartlett, Dr Rohan Vora, Peter Arndt. The Forum was chaired by Frederika Steen. Below is Freddie's speech at the Forum.

10 October 2006: Living in limbo on Nauru: the last Iraqis marooned offshore - Two Iraqi refugees who fled from Saddam Hussein, Faisal and Sagar, remain marooned on Nauru for more than five years, because ASIO declared them as 'official threats' to Australia.

11 January 2004: Signing up for Death: the hunger strike on Nauru - The hunger strike has slowly fizzled out after more than four weeks. But if those 'unlucky ones' who are not 'selected' for re-determination stay behind on the Island, there will be another disaster in the future. Only if they receive an offer of protection status in Australia ... further disaster can be averted.

The only Australian Parliamentarian to visit the Australian border prison camp on Nauru in the last six months did so twice. Andrew Bartlett, Leader of the Australian Democrats returned from his second visit last week, strongly challenging Minister Amanda Vanstone to visit the island and witness for herself the climate of despair that is spiralling men women and children into ill health. What is the solution? Bartlett says " Give them all permanent residency in Australia. That's the least we can do. They have suffered far, far too much."

The Pacific Solution is "unfinished business". It is certainly no solution. And it remains Australia's business. A total of 283 asylum seekers remain on Nauru after more than two years' imprisonment. Fifteen of the 93 children are babies born in Nauru. Hard to comprehend, but four children are unaccompanied boys. Many are "Tampa refugees", rescued at sea 30 months ago. We did not know at the time that they spent a week packed like animals in the hold of HMAS Manoora without seeing daylight. No respect for their human rights or their refugee circumstances. We were deceived when lead to believe they were comfortably accommodated in a troop ship, to Australian standards.

The 284th detainee now in Topside Camp, near the tiny equatorial island's garbage tip, was secretly transported to Nauru from Baxter Border Prison Camp on 21 January this year. Significantly, just before he would become eligible to lodge an application with the RRT. Judicial oversight deliberately avoided. He is a mentally ill young Iraqi Christian brought from Manus Island to Australia because he needed treatment. Detainees now regularly disappear from immigration prison camps without notice, leaving friends, advocates and lawyers bewildered. No dignity, no human rights for asylum seekers. Absolute power and no public accountability for those in authority.

The prime focus of Bartlett's second visit was the welfare of women and children. He has been haunted by the realisation that the Australian Government has knowingly separated children from their fathers living in Australia for more than two years. Bartlett's quiet contribution to behind the scenes negotiations with UNHCR and New Zealand saw a compassionate offer last October to reunite three families in New Zealand. Dependant mothers and children had been refused refugee status by Australia even though fathers were refugees on temporary visas already residing in Australia. New Zealand has again come to the rescue last month with the same offer of permanent residence for six Iraqi women and their children - a total of 20 people. Under Australian law, the incarceration of children - let alone for indefinite periods - is illegal. We do it to innocent asylum seekers under 18 years. Under international law, detention of children is a last resort - for as briefly as possible. We do it for years.

Another focus for Bartlett was the condition and recovery of 45 courageous men who, in abject and compounding despair, had protested against the indefinite incarceration of all remaining 283 people. They commenced a 30 day hunger strike, for "Freedom or Death" on Human Rights Day, 10 December. The 706 hour protest was deadly serious, says Bartlett, and he was reassured by the apparent recovery of the men and the medical services provided by the International Organisation for Migration. But to date there has been no independent assessment of hunger striker or asylum seekers' medical conditions nor of IOM medical services to asylum seekers in Australia's care.

The Health Alliance/AMA team of medical experts (over 300 volunteered their help) was refused visas to assist the Nauru Hospital during the hunger strike. Dr Rohan Vora raised concerns about the lack of ethical transparency in detention health services and the mounting evidence of neglect and malpractice and the collusion of some contracted medical staff in mainland detention centres. An Australian Government delegation sent in January in the wake of the hunger strike, has recommended additional funding to the struggling Nauru Health Services but was specifically directed NOT to assess the health and health services of the detained population.

"What are they hiding"? asks Dr Vora. "These 284 people are Australia's responsibility and should be cared for at Australian standards of medical care". He called for an urgent independent professional assessment by people skilled and experienced in refugee health issues. The Government knows - it has been told by many professional experts - that long term denial of freedom of innocent asylum seekers results in permanent damage to people, especially to vulnerable children in formative years. The mental health concerns reported to Bartlett by IOM doctors and illustrated in the many letters sent to Australian friends, must be acknowledged and dealt with. It is quite clear that immigration detention makes people sick on Nauru and in all other border prison camps.

The hunger strike from 9am on 10 December 2003 to 5pm on 8 January 2004 was an unfolding tragedy. The individual efforts of Elaine Smith and Hassan Ghulam, who were in direct and regular contact with the asylum seekers by phone, fax and e-mail brought it to the Australian and world media. They gave a voice to men whose life threatening protest Minister Amanda Vanstone coldly ignored for 22 days of no food, no water, before they received an official letter advising them of what she had already announced to who ever was listening on Christmas Eve. And her message to them in English was non-committal: when her Department receives updated country information on Afghanistan from the UNHCR, relevant cases might be reviewed. No concern expressed for the men whom she accused of blackmail. No acknowledgement of the substantial reasons underlying the protest. No stated intention of resolving the desperate circumstances of 284 abandoned human beings.

Nauru is a media exclusion zone. The isolation of this very remote, border prison camp is almost total, inviting comparison with Guantanamo Bay. The resultant vacuum in news and information feeds a serious misconception among Australians that detaining people on Nauru is a response to September 11 and part of the war on terror. Email technology has been a critical saviour of freedom of speech and communication. Personal email sent from the only internet café has enabled asylum seekers to communicate with the outside world, although reliable access is limited. Nauruan postal and telecommunications services are subject to interruptions with technical and financial causes. The BBC's Sarah MacDonald's brilliant story "Pacific Solution" (September 2002) was not screened on Australian television. More recently Kiwi journalist, Kim Ruscoe got around visa conditions and wrote an eyewitness account of the conditions and humanised the hunger strikers and the reasons for their protest. Why are visas not issued to journalists or to doctors, lawyers, human rights activists, or Jesuit priests? Nauruan politicians and officials are said to be defensive about criticism but it is strongly perceived that the Australian Government "encourages" them to keep out all trouble makers. What sort of a message is this sending to our neighbours? What fearless and independent reporting is there?

UNHCR's Regional Office in Canberra was warmly acknowledged for its assertive intervention in the so-called Pacific Solution, and its initiative (not related to the hunger strike) announced before Christmas to review their 22 refused cases because circumstances in the claimant's place of origin had changed. Its focus on the human rights issues of asylum seekers in Australia's care is exemplary, and broadcasts a message to the world that all is far from well in Australian asylum policy and practices. Regional Representative Michel Gabaudan upholds the finest ideals and traditions of UNHCR in challenging Australia's breaches of human rights and its obligations under the 1951 Refugee Convention and 1967 Protocol. UNHCR reunited families when it assessed its randomly allotted caseload on Nauru - a caseload which was properly Australia's to determine. And UNHCR negotiated the New Zealand circuit breaker which saw a few more families reunited. New Zealand's moral leadership in immediately welcoming 130 Tampa refugees for permanent settlement was applauded. Now, after two years, they are eligible for citizenship and sponsoring their families. Unaccompanied minors are now being reunited with their parents and siblings in New Zealand.

Tribute was paid by all speakers to the humane efforts of many Australians who keep hope alive in the asylum seekers through their validating and supportive letters and emails and gifts of telephone cards and many other items. Container loads of material, clothing, educational material etc have been sent. The generosity has been classic Australian, like all community responses to a disaster, be it fire or flood or earthquake. But this one is man made and it cuts deep into the conscience of those who know the facts. More than $5,000 worth of Telstra phone cards enabling contact with family and friends has been donated recently. That however does not go far among 200 adults trying to phone Afghanistan or Iraq. And the Australians' concern extends also to the Nauruan people who have been shamefully used to accommodate innocent asylum seekers on their island. No Nauruan politicians or officials have visited Topside Camp. Locals are now employed by IOM as gardeners, cooks, cleaners closing off possibilities for asylum seekers to earn some money.

Australia's Nauru border prison camp, with 284 asylum seekers neither charged nor guilty of any crime after 29 months, is a symbol of all that is legally and morally wrong with Australia's asylum policy. Human rights abuse. Children imprisoned. Indefinite, non reviewable detention. Breaches of international law pertaining to human rights, the rights of the child, and torture. Judicial overview, due process and natural justice denied. Media and public scrutiny denied. Asylum seekers' lives and health destroyed. Children's mental health and development irretrievably damaged.

A significant and growing number of ordinary Australians are appalled. They act - individually and in small groups, from places around Australia, to show compassion and to compensate for what they perceive as official sadism and inhumanity. From the grassroots of Australian society they continue to challenge the Government that has eroded our international reputation for fairness and decency and called into question our values as a society.