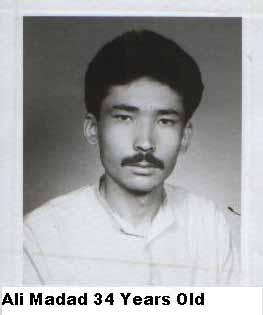 Recently we received a request from friends in Indonesia, who asked our help to find out what happened to six refugees who were with them in Indonesia, but who have been missing since December 1999. In the meantime, refugee advocates have "traced" back three of the six - deported from Australia after wasting years in our detention centres.

Our friends wrote from Lombok:

"Is it possible to check somewhere or ask someone who knows about missing refugees, or may be there are some detention centers that no one can access that?"

"I have forwarded the pictures of some refugees who are missing since December 1999 in Indonesia and we do not know that they sunk in the sea, they are in detentions in Australia, they are in some other prisons of Offshore Islands like Nauru, PNG and Manus or somewhere else."

"If they are alive they can [be] in the same names as written under their pictures [....] or may be with different names but someone canm identifiy them by pictures."

A relative of all six men wrote:

in November 1999, (32 people ride on the Boat from Indonasia jikarta to go to Australia, on that boat 15 people were Hazara, 8 of them are belong to my family and 7 other Hazaras that i dont know the name of them, and 17 Arabs were on that boat. here is all information about missing people that i know. at the end i would like to thank you Mr Ramzan Ali And Mr jack for your help that you are doing for me.

The missing refugees may well be fine and OK. Below are some possibilities:

We know that 353 people drowned at sea on Australia's watch in 2001, when the boat now known as SIEV X sank in International waters - in an area patrolled by the Australian government's Operation Relex. The six people may have been passengers on that boat.

Regrettably, there are also other credible reports that more boats on route to Christmas Island have disappeared.

On at least one occasion during the years 2000 and 2001, refugees who were processed on Christmas Island have frantically tried to alert Australian federal police (AFP) as well as staff in charge of processing their claims on the island, that 'there are more boats behind us on the ocean' and have told AFP, DIMIA and people on the island that these other boats were in distress and that they were very worried about the passengers on these other boats.

We have it on good authority that those frantic calls for help were ignored by DIMIA and the AFP at the time. The six refugees may have been passengers on one of those missing boats.

This report is about one of the boats stopped moving because of hole created in it. [This probably took place in June 2001] I will write for you one by one.

We were around 220 passengers in a boat while it had the capacity for 100 people and it was too much overcrowded and over loaded. We came from Surabaya by machine for four hours to get on the boat. There were many police who were escorting us to the seaside. This boat moved at 12 PM from Surabaya. We continued sailing to the way of Australia for two days and half. We reached near Biam Island that the captain of our boat told us that we want to change the oil, then they changed the oil and filled new oil. We walked for hours that the engine started giving sounds. Then the captains stopped the boat and checked the engine with some mechanics that were among passengers. They found that when they refilled the oil, either they opened the filter of engine or not but they pierced the filter by screw while changing the oil of engine does not need to open the filter. Therefore while moving two hours way the pressure from inside of filter sprayed all the oil out instead to filter and send it to the engine. The oil was completely finished and the engine was badly dry and had no oil to use it, then it produced horrible sounds.

The engine stopped and mechanics and captains all believed that this engine is not working any more. The captain had a wireless with them, they contacted the smuggler people what to do, and the engine of boat broke down. But the smuggler did not care and pretending that we cannot understand your words. All passengers were shouting and crying on smugglers through wireless but the captain intentionally or unintentionally changed the positive cable into negative and vice versa then the wireless burnt and disconnected from smugglers to talk with.

Then we lost the hope and were thinking how to find and land in any nearest island. There were many ships that watching us by their camera and coming near into some extent then leaving us badly. We could not understand that what kind of rule the sea had, no one cared us while many watched and observed us in a very horrible situation.

We got confused that how to land in any island. The engine of boat stopped working around 4 PM, then we expected and waited the help of other ships were crossing around us. We remained waiting like this for one day. Then we found that no one helps us and came to think a way of rescue by our own selves. No one was able to find or to know what to do. Finally some one told to open the boards which were around engine and use it to row the boat. Some other passengers felt it joking and said you are going to row the boat with its 220 passengers!!??? Of course it seems hundred percent impossible to row a big boat loaded 220 people.

Since we could find no option for rescue we started opening the boards which were around engine. The boards were four meters long and 30 Centimeters wide. Many passengers put their clothes off and tied it at the end of each board. One person takes from one end of the board and stand at one side of it and another person throws other end in the sea and pulls it by clothes tied at it. Like this we had around 10 pairs at one side and 10 pairs of people at the other side to throw the board and pull it back.

We rowed the boat with its 220 passengers for a complete two days to land in small Island of Poso in Indonesia. The residents of Poso Island helped us and we remained there for two days then police brought us to Bima, another island of Indonesia.

While we were waiting for the help any possible ship that suddenly the gas stove in our boat got fire that fortunately one of the passengers showed selfsacrifice and grabbed the stove with its fire and tried to throw it out but the window at the back of the boat was smaller than size of gas stove. It took while to break the window and throw the gas stove in the sea. The front part of man's body who grabbed the stove was completely burned severely. His hand, face, chest and legs all. If the window at the back of the boat was big enough to throw the stove he would not be burnt too much.

Please contact us here if you recognise any of these refugees from their names and/or photos.