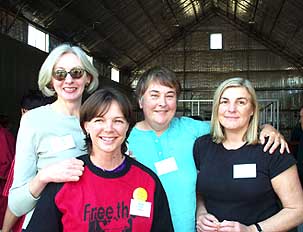 ...or the First RAR National Conference

On 7 and 8 December 2002 in Mudgee NSW, Rural Australians for Refugees had its first National Conference.

Project SafeCom was there, and we were impressed. Although many people, especially farmers from NSW and Victoria, had many other things on their mind, like the drought as well as the severe fires around Sydney and the Blue Mountains, more than 150 RAR members from around Australia attended.

7 December 2002: The Mudgee Muster photos: RAR Supporters and Friends in Mudgee - Some casual shots, by Grace Gorman, of the Mudgee RAR get together: From politicians to refugees, they were all there!

7 December 2002: Justice for Asylum Seekers Alliance: Reception and Transitional Processing System - Speaking at the Mudgee Rural Australians for Refugees Conference, Grant Mitchell presents an alternative approach to dealing with the processing of asylum seekers for Australia: The Reception and Transitional Processing System provides a realistic, detailed and soon to be costed reform of the immigration detention system which resolves many of the serious problems...

Dear All - especially those who couldn't make it to Mudgee!

The first annual RAR Get-Together was a fabulous event,successful beyond our wildest dreams.

We all went home energised, excited - and tired out from an intense and fulfilling day-and-a-half together. Our heartfelt thanks to Mudgee RAR who dreamed up the idea, mid-wifed it and then staged the actual event without a flaw.

And thank you to the 150 plus participants who turned up from as far afield as Narrogin in WA, Goodiwindi in Queensland and Port Augusta in SA, and a couple of dozen RARs in between.

....opened with Anne Coombs welcoming us all and reminding us of our successes and failures and the scope of our future tasks. Then Margaret Piper from the Refugee Council of Australia gave an overview of the world refugee crisis and Australia's particular role in it. Margaret's years of experience and her fine mind made for a powerful and informative address. We will be posting up her talk on the RAR website. Margaret also stayed around for the whole weekend, which was immensely helpful as she was able to contribute relevant facts whenever required.

Women on the ground

The next session had many of us in tears. Four remarkable women who are working closely with detainees and people on TPVs - literally devoting a huge part of their lives - gave addresses that were filled with the distress and suffering they had witnessed and felt, and first-hand vital information. Our thanks to the 'young' ones - Kate Gauthier and Natasha Verco and, the 'veterans', Jacqui Everitt and Trish Highfield.

Twelve young Hazara men working at the Mudgee abbatoirs came on stage so that we could meet them personally. Eighteen-year-old Abus translated the speech from Persian of Ali, telling us of their lives in Aghanistan, and their situation since they arrived in Australia. The dignity and strength of what they had to say reminded us of what it is we are fighting for - a far far better deal for asylum seekers who have come to Australia seeking our help.

Next came the politicians, and Andrew Bartlett in particular impressed us by not behaving like one. His speech was measured and informative, particularly on the raft of insidious legislation that has been rammed through Parliament ever since Tampa. His speech too will go on the website. Greg Barns, the Liberal candidate disendorsed because of his principled stand, gave a fiery, wide-ranging talk, castigating all sides of politics for their lack of vision and substance. The disappointment was Sylvia Hale from the Greens (a last-minute ring-in to be fair), and the RAR audience made their indignation at her playing party politics at our forum very clear indeed.

After lunch we all let off steam by roaring out a "Rar Rar Rar" for RAR!! Then Martin Feguson, Shadow Minister for Regional Development, detailed the recently released Labor Policy on Refugees. Ferguson made no concessions, apart from admitting that he was giving us Labor Policy "warts and all." And the audience made it very clear to him that Labor's continued policy of mandatory detention (albeit reduced to three months) and its retention of TPV's (albeit modified) was simply not good enough. Questions to Mr Ferguson were pointed and vigorous, although he said defiantly at the end that he'd had far tougher times with unionists . . .

The following session, "Experiences from the Bush - Possibilities and Tensions in Rural Areas" saw wide participation, with many people sharing experiences and initiatives, successes and failures around the country. We were getting tired, but attention was revived when two excellent speakers took the floor - Grant Mitchell on Policy Alternatives and Nick Poynder on the legal issues - both of whom gave us hard facts and thoughtful frameworks.

By the time it came to beginning our own debate - Advancing the RAR Agenda - ideas were flowing. Among the issues flagged for further discussion on Saturday, were:

The wind dropped, so tables were set up outside the large and elegant shed that was our conference centre and the serious networking began. In between courses the Inaugural RAR Journalist's Award went to John Highfield for his consistent and courageous coverage of refugee issues. Bruce Haig presented each of the Mudgee Hazaras with a gift to mark the end of Eid [Ramadam]. A lovely night.

Anne Coombs announced the winner of this year's TAMPA HUMAN RIGHTS AWARD. It went to Mount Isa City Council "for displaying moral leadership in the community by creating a welcoming environment for refugees and promoting the benefits of cultural diversity."

In May this year Mt Isa declared itself a 'refugee-friendly city' and the Mayor, Ron McCullough, in particular has been very strong on this issue. The stylish plaque (thanks again to Michael and Greg of Redback Graphix) was received on the Mayor's behalf by one of the chief Mudgee organisers, Joc Stenson, who read a statement sent by Ron McCullough:

"It is a great honour to receive the TAMPA award and we are delighted to accept it. I am sure however there are many deserving recipients within the Australian community. My Council's action was simply a statement trying to redress the stupidity and inhumanity of the treatment of Asylum seekers and Refugees. To offer Mount Isa as a place of welcome and refuge to those in search of a friendly hand is a small way to repay the Migrants and Refugees who made our City what it is,who gave us a splendid diversity of cultures and strengths and taught us to respect all others. We believe that to bring attention to the inhumane treatment of other human beings is a moral obligation and that Australia is a poorer country for allowing their politicians to lose sight of this. God bless you all for your efforts."

Everyone knew we could well be in for a tumultuous session when the future structure of RAR was debated, and Jim Main from Cootamundra RAR did a sterling job of keeping us under control and moving the discussion forward. The key issue was how to find a structure that would retain the 'magic' of RAR - its lack of bureaucracy, it's loose criteria for membership, and the autonomy of local groups - the many different ways that different RARs go about things - but that would also capitalise on the phenomenal growth of the last year and give us a united and even more influential voice in the pro-refugee movement.

Convenors Helen McCue, Susan Varga and Anne Coombs proposed a model which was an extension of our workable modus operandi to date: ie that for the next twelve months another RAR regional group take over the administrative function, but with the help of a small additional national committee from around the country. The new regional group would not in any way be 'boss' - it would act as before as a clearing house/co-ordinating group, and occasionally providing a spokesperson when the need arose.

RAR groups around the country would continue to be fully autonomous, including handling their own media. When the next twelve months is up - and hopefully after our next Annual Get-Together - another group could take over the responsibility. Strong debate ensued, with some expressing fears that a formalised committee could become top-heavy and the initiative and energy could be sapped at the grass roots level. At the end of the session, consensus was reached that a national committee be formed - with three members of that committee being the new co-ordinating group. Who that group will be is not yet certain - two candidates, Castlemaine and Armidale are consulting with their membership. A rough plan, but something to go home with!

The final hour, ably facilitated by Natasha Verco, was a dense exchange of ideas for future strategies. Below is a summary supplied by Castlemaine:

Emails of possible coordinators and/or people with great ideas

The Mudgee Get-Together was a really terrific event and our thanks again to Mudgee RAR and to Bruce Haig and Joc Stenson in particular. And from Anne, Helen and Susan, the three women who 14 months ago thought they 'should do something', a huge thank you to all of you in rural Australia who have made RAR.

We might have had the idea, but unless you'd turned up in your numbers and proved to be the energetic, dedicated, passionate people you are, RAR would still be just an idea.

We're handing the baton over, but we'll still be around - impossible to leave such a wonderful organisation and impossible to walk away until asylum seekers are released from detention and welcomed into our communities.

Location: The Australian Rural Education Centre (AREC) is five minutes from Mudgee and located next to the airport (further details on request).

Accomodation: Motels, B & B's. Participants will also be able to camp at the AREC site.

Huntington Winery is having a music festival from 4-8 December so motel accomodation should be booked sooner than later. Enquiries can be made about accomodation through the Mudgee Tourist Information Centre on 02 6372 1020.

Participants should bring whatever they need in the way of food. Wine can be purchased locally. Breakfast, lunch and dinner will be available at the AREC site. Music will be provided on the Saturday night.

Flights are available into Mudgee and Dubbo. Transport will be provided from Mudgee and Dubbo airports. Prior notice will need to be given to the organisers. Further information on flights can be obtained from the Information Centre.