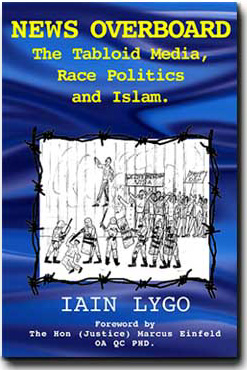 When the Tampa rescued 433 asylum seekers Captain Rinnan's courage and compassion was celebrated though out the world. In Australia, Rinnan and his container ship were portrayed as a threat to our sovereignty. In Howard's Australia, asylum seekers are mandatorily and indefinitely detained in camps, off-limits to the media.

This fundamental breach of human rights not only goes unquestioned by the tabloid media but is celebrated by the shock jocks and many ultra conservative columnists and editors.

Channel Nine's political commentator Laurie Oaks argued the 2001 election was won through "dog whistle" campaigning. He argued the conservatives' message was pitched at a level that attracted the racist vote but went unheard by the rest of the population. News Overboard critically scrutinises how the tabloid media also blew the "dog whistle" in 2001 and continues to blow it today.

About the publication News Overboard: The Tabloid Media, Race Politics, and Islam: This book is now out of print, and we no longer supply it to our members or to the wider public. We suggest you could search for online second-hand bookshops to secure your copy.