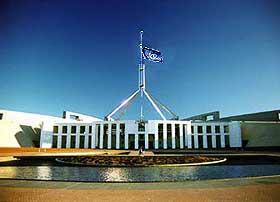 Canberra Parliament House: At Project SafeCom we're working on raising the UN Flag higher again. It has been half-mast for a long time now...

Open Letter to Politicians Full Of Questions About Refugees

Questions to Australian politicians about refugees

This page lists a number of questions about Iranians and deportations sent to Australian politicians.

Copies of that submission were also forwarded to all Australian media organisations and international human rights organisations.

In January 2003, a delegation of Iranian Mullahs visited Parliament House in Canberra, while rumours circulated that John Howard's Immigration Minister Philip Ruddock had plans to deport 190 Iranians held in Australian refugee detention centres back to Iran, where they may face persecution, arrest, imprisonment, torture, or even death. This page lists the questions Project SafeCom sent to Canberra's politicians.

Below is the list of questions, followed by some news articles that are reprinted here. Just above these articles are some pop-up photographs that come with a TRIGGER WARNING: photographic evidence of Iran's punishment of "public death by hanging". Prepare yourself, these are graphic images. Here's the itemised list, linked to their locations below on this page.

Click the links below to jump down to the articles and items on this page with the same title.

Open Letter to Politicians Full Of Questions About Refugees

In this letter I am raising questions
1.1.
I understand from the Australian media, that a delegation of Iranian Mullahs is visiting Canberra this week. I also understand that the Hon. Minister Philip Ruddock is pressuring them to agree to the involuntary repatriation of 190 Iranian asylum seekers from the Australian Detention camps.
1.2.
Iran is second after China as a mass executioner of its citizens. The USA is third. Public executions are carried out in Iran. Stonings, amputations and eye gouging are some of the methods employed in this regime. The Hon Minister Philip Ruddock would send our Iranian friends back to this system.
1.3.
More information and details about this supplied below - courtesy of the Hon Minister Philip Ruddock's "Membership Badge Organisation" - Amnesty International, and refugee advocates.

My questions relating to these first points are:

a.
what is the nature of the ethics of Duty of Care and responsibility for refugees, that enables the Minister to do this, and what are the grounds upon which the Minister decides to seek this agreement?
b.
I note with this question, that many UN Refugee Convention signatories have, in addition to their refugee approval process, also a clause for "persons in need of protection" under the terms of their refugee legislation. Does Australia have such a clause? If it does, why have Iranians not been accepted on these grounds? If it doesn't, wouldn't there be an extremely urgent need to have such a lause in Australia?
c.
how can the Hon. Monster Philip Ruddock reconcile the visit by these Iranian delegates and his intent during this visit, with his membership of Amnesty International, which, as outlined at the bottom section of this email, is extremely concerned about what happens in Iran?
d.
do you think that this visit was planned deliberately before Parliament resumes next week so the Honorable Minister could avoid any questions being raised by you or other Parliamentarians?

2.0.
I also understand that during Autumn 2002, the Hon. Minister Philip Ruddock's department DIMIA, received applications due at that time from refugees in the Australian community living on Temporary Protection Visas for renewal of their residency Visas. I understand that if successful, these applicants would qualify for permanent residency in Australia under the terms of the Migration Act.
2.1.
In this context I note that on December 20 2002, DIMIA sent out offers of repatriation, named the Reintegration Package, to all TPV holders in the Australian community who are from Afghanistan.
2.2.
Severe fighting has broken out between the US Army and tribal groupings, has been reported this week in worldwide media. Afghanistan is still ruled by warlords. The UNHCR Refugee agency has admitted it has been mistaken by allowing the masses of refugees to be returning to Afghanistan. Human Rights Watch has declared Afghanistan still unsafe.
2.3.
In signing the Repatriation Package, those who accept the package, also sign for this clause:

"I/we further understand that I/we will be required to formally withdraw/discontinue any matters before UN Treaty bodies such as the UN Committee Against Torture or the UN Human Rights Committee prior to my/our departure from Australia."

2.4.
A group of Australians recently posted a petition on the internet, calling for international prosecution against five members of the Howard government. In fact, they called for an indictment under the Nuremberg principles or Article six (6) of the Charter of the International Military Tribunal. You can read the petition here:

2.5.
a "Bribe" is considered to be "something, such as money or a favor, offered or given to a person in a position of trust to influence that person's views or conduct." (American Heritage® Dictionary of the English Language)
2.6.
"Blackmail" is considered to be "payment of money exacted by means of intimidation" (Webster's Revised Unabridged Dictionary)

My questions about these second points are:

Iran 2003: New Round of Savage Punishments

The 19-year-old, identified only as Davoud, had already been arrested twice and whipped after being caught drinking alcohol, a practice outlawed since the 1979 Islamic revolution.

A court in Shahre Rey in southern Tehran sentenced him to death, as required by the country's strict Islamic laws for a third drinking violation, the Iran newspaper reported.

A year ago, a judiciary official said that authorities had seized a million bottles of alcohol around the country in one month. Punishments for possession of alcohol includes large fines, spells in jail and flogging.

More news articles about this:

Iran daily, Jan. 11: A 19-year-old man named Davood, who was arrested for the third time for drinking alcohol, was sentenced to death by a judge. The judge issued the death sentence on the basis of articles 165, 166,168, 172 and 179 of the Islamic Punishments Act and fatwas issued by the senior Ayatollahs.

Davood's court-appointed lawyer: "If the accused has been drinking purposefully and knowingly and is insisting on his statement while there is no doubt about his state of physical and mental health, then his sentence is determined by article 179 of the Islamic Punishments Act, which states that if an individual is found guilty of drinking alcohol for the third time, he would be executed."

Fear of imminent amputation in Iran

According to reports, a Revolutionary court in Shiraz, south western Iran have sentenced the men on charges of an "armed uprising against the Islamic regime" and theft. They have reportedly been sentenced to have their right hand and left foot amputated.

Since 2002, Amnesty International has recorded nine amputations, although the true figure may be significantly higher. Of the recorded amputations, one was a cross amputation. Punishment by amputation is imposed often in connection with theft.

Amnesty International recognizes the rights and responsibilities of all governments to bring to justice those found guilty of a recognizably criminal offence. However, the organization fundamentally opposes the cruel, inhuman and degrading punishment of judicial amputation and considers it to be a form of torture.

Tehran - Two thieves each had the four fingers of their right hands amputated as a punishment under Iran's Islamic sharia law, the daily Entekhab reported on Wednesday.

The two repeated offenders had been found guilty of about 200 thefts in a year by a Tehran court.

It was the second such case in a week, following a similar punishment on two thieves in the southern city of Kerman on January 8.

Amputations are comparatively rare in the Islamic republic, which carries out frequent executions for a variety of offences, including stoning for adultery.

The European Union in particular is attempting to persuade Iran to abandon such punishments.

Clampdown on music, the press

TEHRAN Jan 12 - Police in southern Iran have announced a ban on playing any kind of music in public, even on car stereos, the official IRNA news agency said on Saturday.

Following Iran's 1979 Islamic revolution anything but classical or religious music was outlawed, forcing even performers of traditional Persian music underground or overseas.

"According to Iran's penal code, playing authorised or unauthorised music either loudly or low is prohibited in cars, shops and taxis," IRNA quoted the police information centre in Fars province as saying.

IRNA said police had yet to decide how offenders would be punished.

Music had made something of a comeback in recent years as social restrictions became more relaxed following the election of moderate President Mohammad Khatami in 1997.

Concerts for officially sanctioned groups are frequently held and young motorists can often be heard blasting out the latest U.S. or European pop tunes available on pirated tapes and CDs or via the Internet.

But the concerts are largely tepid affairs, with audience members prohibited from dancing and drivers are occasionally pulled over and fined for playing their music too loudly.

The Special Court for the Clergy on Saturday issued a temporary ban on Hayat-e-No daily.

The Special Court for the Clergy said that the daily's Managing Editor Hadi Khamenei was summoned to the Court and was informed to stop publication of the daily until further notice.

Hayat-e-No on Wednesday printed a caricature dating back to 1937 of former US president Franklin D. Roosevelt and the then US chief justice engaged in a dispute as example of a row between the executive and judiciary branches.

Religious schools have misinterpreted the caricature and said that the daily meant the late Imam Khomeini by printing the caricature of the US chief justice.

From http://www.irna.com/ (no longer available online)

A court here Saturday ordered the Persian daily Bahar (Spring) to suspend publication because of several charges brought against the paper, including insulting state officials and inciting public opinion.

In a letter to Minister of Culture and Islamic Guidance, Ahmad Masjed-Jamei, Bench 1408 of the Tehran Public Court cited 13 charges of violations against the daily.

"The daily Bahar, despite earlier suspension and conviction on several charges, has been persisting in propagating against the (Islamic) system and publishing lies in order to instigate public opinion," the court said.

"Please require that the daily is prevented from printing and publishing until further notice," it said in a part of message to the culture minister.