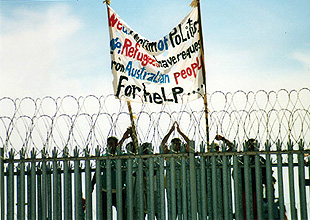 The 2002 Easter weekend convergence protest at the Woomera detention centre was a unique and astoundihg event. It was a story broadcast right around the world. This page is connected to those Easter events.

The cries for help

Many, many requests for help, notes for help and petitions to Australians have been sent by our friends in Australia's detention centres.

A number of them have been brought together on this page. Some were written by children.

Some were scribbled on note paper, wrapped around a rock and thrown over the fence of a detention centre during protests, like during the Easter 2002 Woomera protest.

All of them carry the same agonising call for help. It is the unmistakable call from people in pain, from people who endure prolonged oppression, and a systematic punishment regime.

25 June 2002: Hundreds endorse the June 2002 Woomera detention centre hungerstrike - Almost 200 asylum seekers locked up in Woomera started a hungerstrike in June 2002, and issued a statement. We asked for public endorsements of their statement and cause, and within days more than 660 organisations, alliances and individuals sent their names and comments.

25 June 2002: The June 2002 Woomera hungerstrike: endorsements 1-400 - Almost 200 asylum seekers locked up in Woomera started a hungerstrike in June 2002, and issued a statement. We asked for public endorsements of their statement and cause, and within days more than 660 organisations, alliances and individuals sent their names and comments.

25 June 2002: The June 2002 Woomera hungerstrike: endorsements 401-600 - Almost 200 asylum seekers locked up in Woomera started a hungerstrike in June 2002, and issued a statement. We asked for public endorsements of their statement and cause, and within days more than 660 organisations, alliances and individuals sent their names and comments.

25 June 2002: The June 2002 Woomera hungerstrike: comments - "Current Government policy on refugees makes me ashamed to be Australian. This country has been built on refugees and we are now shunning our roots, as though they are not worthy." 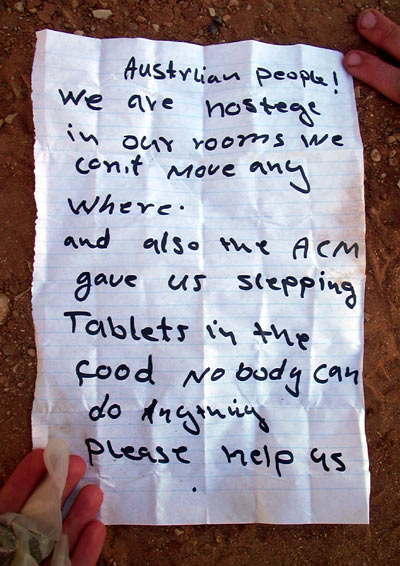 An Appeal from the Asylum Seekers of Australia

We, the imprisoned asylum seekers of Australia, respectfully appeal to the people of the world to hear our story, understand our plight, and come to our assistance.

We left our homes because we had no choice but to flee from brutal, dictatorial regimes. We believed we would receive a fair hearing in Australia, but our pleas for asylum have been unjustly refused. We have been held in detention for a very long time, many of us for more than three years, and our situation shows no sign of changing. The only solution we are offered by the Australian government is to return to the persecution we fled. Without the intervention of an honourable third party, willing to show compassion and common sense, we fear that we will be imprisoned for ever.

Because Australia has rejected our claims, we cannot ask for asylum elsewhere under the UN Convention. We can only ask each nation to look beyond its strict legal obligations and consider the senseless waste of the human spirit that our imprisonment represents. Many of us are skilled, professional people, most of us are young and healthy, and every one of us would contribute with energy and enthusiasm to any society willing to give us a chance.

The problem we face is difficult, but we cannot believe that it is beyond the power of people of good will to find a solution. Therefore, we respectfully appeal to you to consider our situation, and accept us into your country on humanitarian grounds.

Because our history has been misrepresented many times, we wish to put the record straight. We did not come to Australia as willing migrants, seeking economic gain. We only made this difficult journey to escape from violence and repression. Many of us faced imprisonment, torture, or murder, and have already seen our relatives suffer those fates. We have been persecuted for our religious beliefs, our ethnic group, our political opinions, or even the family we belonged to. We would gladly have stayed in our homelands and lived ordinary lives, but that is exactly what our problems have made it impossible for us to do.

Some of us paid smugglers to help us escape, because there was no other way. Often our families sold everything they owned to raise the money we needed. Some Australians condemn us for buying our safety when other refugees could not afford to do the same, but what else should we have done? We all know of fellow countrymen who have suffered terrible fates, but if we'd shared those fates it would not have helped anyone.

All of us passed through other countries before we reached Australia, but these were places where we had no legal right to remain, or to have our claims for asylum heard. Often, the countries bordering our homelands were already burdened with millions of refugees, or caught up in the very same problems that we were fleeing.

Australia is a peaceful, democratic country, and we believed we would receive justice here. Instead, we were imprisoned. At first, for weeks or months, each of us was kept isolated from the outside world, with no mail, no telephones, no radio or newspapers, not even the right to contact the Red Cross. When this period of strict isolation ended, we remained in prison. Men, women and children who seek asylum in Australia are locked up in remote detention centres until they are either granted a visa or deported, however long that process takes, whether it is three months or six years. Even blind men and pregnant women are kept behind razor wire.

What has made our imprisonment harder to bear is the manner in which our claims have been considered. For some asylum seekers the process has been fair, but that is more a matter of luck than justice. When two people with identical circumstances are interviewed by different officials, one will receive a visa while the other will not. Ignorance about the culture and politics of our homelands, flawed translations, and even the temperament of officials have all led to unfair decisions.

Whatever evidence we present, whether it is our personal testimony or a report from a respected authority, it can always be ignored or dismissed by an official whose mind is already made up.

Unfair decisions can be appealed, but the facts can only be challenged before a single member of a review tribunal, who plays by the same rules as the immigration officials. If the deadline to appeal a decision is missed, the tribunals and courts have no choice but to refuse the appeal, whatever the reason for the delay. In the past the courts could overturn decisions where legal errors were made, but now the government has changed the law to make that impossible. All the errors and misunderstandings that deny us freedom have been carved in stone.

The conditions of our imprisonment are harsh. We suffer small humiliations every day, as well as more serious acts, including the refusal of medical treatment, and interference in the conduct of our cases. Any dispute can end with beatings and tear gas. Some officers deal with us fairly, but we have no protection from the rest. On paper, we have the right to complain if we are ill-treated, but in reality this counts for nothing. The Ombudsman, the Human Rights Commissioner, Parliamentary Committees and United Nations representatives come and go. The government mocks and dismisses their reports, or makes some small change after a year or two has passed.

Because we are human beings, sometimes these pressures become too much for us to bear. At times, some of us have destroyed property, or fought with each other or our jailers, but the most harm we have ever done is to our own bodies. Often these actions have caused the Australian public to condemn us, but when people are imprisoned for years and deprived of all hope of justice, it is impossible for them always to act calmly in their own best interest.

We confess to our own human frailties, but the government and the media in Australia have worked hard to poison the minds of the public against us. They have lied about our history, our character, our circumstances, our actions and our motives. We have fled from extremists and terrorists, but they have claimed that we ourselves are terrorists. We have fought with all our strength to protect our children, and they have lied and said that we wilfully endangered them. When our friends send us gifts to help us pass the time, the media claims these things are bought with government money. When there is damage to a detention centre, the TV cameras are invited in to show the ruined buildings to the world, but no journalist has ever been allowed inside to document the destruction of our souls.

This is the situation we find ourselves in. We cannot return to our homes, and the Australian government will never release us. Some of us will be deported by force, but the rest of us will remain behind razor wire for another year, and then another.

We came here looking for freedom, safety, and justice. Instead we found nothing but traps, built of steel bars, bad laws, and dishonest politics. Inside these cages, children have grown into adults. Young men's hair has turned white. Babies have been born, taken their first steps, spoken their first words, seen their first sights. Most of us, separated from our families, have become like ghosts to our mothers, our wives, our children.

The only hope we have is for another country to intervene and agree to take us. We understand that Australia's rejection of our claims has deprived us of any right to seek asylum elsewhere under the 1951 Convention Relating to the Status of Refugees. Because of this, our future is in the hands of those nations with genuine humanitarian concerns that go beyond following UN conventions.

We respectfully ask you to consider our plight, and any steps that you are able to take to assist us.

What can we offer to the benefactor who rescues us, and restores our faith in humanity? Only our hard work, our loyalty, and our lifelong esteem and gratitude. 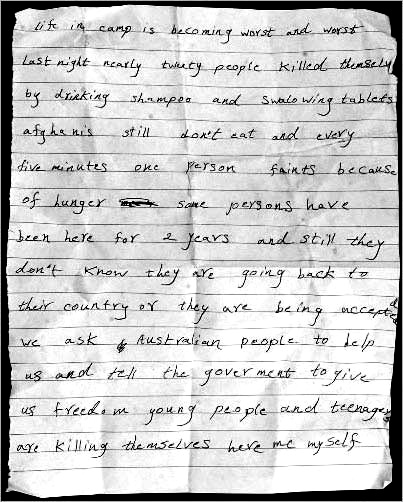