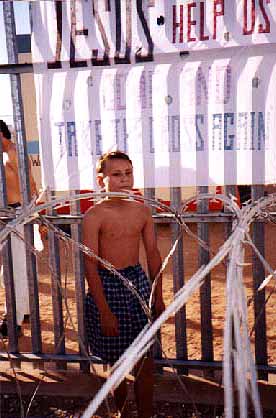 "I'm sorry. We failed to protect you."

This article was written on the day the Human Rights and Equal Opportunity Commission report into Children in Immigration Detention was released. The Report suggested the release of all children within four weeks, and roundly condemned the Australian government for its damaging asylum seeker policies.

"I feel shame that my country blatantly breaches the international convention on the rights of the child, violates the human rights of asylum seekers and refugees.

And that it torments proven refugees with the insecurity of three or five years of temporary protection and fear of deportation to the scene of their persecution."

"I expect that future generations will see this period in our short history as one where the forces of darkness prevailed..."

15 January 2005: No way out: the High Court and children in detention - In two important recent cases, the High Court concluded that the Australian Government has the constitutional and statutory authority to detain children mandatorily - even for years ... it is said frequently of Australia's constitutional system that 'if it ain't broke, don't fix it'. But if there is no way out for a child - it's broke.

9 July 2004: Children in Detention: A Parliamentary E-Brief - "The mandatory detention of all asylum seekers who arrive unauthorised in Australia -- a measure introduced in 1992 -- has attracted a great deal of attention and debate over the last few years..."

Children in detention: "I'm sorry. We failed to protect you"

Frederika Steen, who is a Centenary Medal recipient, was awarded the AUSTCARE Paul Cullen Humanitarian Award for Queensland in 2003. A former Canberran of the Year (1984), she has been actively involved in community refugee, multicultural and human rights activities for thirty years. She retired from the Department of Immigration in 2001 after a distinguished career in settlement services and three years' service as the Chief Migration Officer in the Australian Embassy in Germany. Today she is a volunteer worker at the Romero Centre in Brisbane, a group of Australians supporting refugees on temporary visas.

The Centre receives some small grants from the Queensland Government. Nothing from the Commonwealth Government. It has been sustained for more than three years by generous donations from individuals and some Christian religious orders. Contacts: The Romero Centre, PO Box 6115, Buranda Queensland 4102.

As a volunteer worker for a small refugee support group in Brisbane for almost three years, I have spoken to thousands of Australian men women and children in schools, church halls, community centres and at public rallies. All have been stumped by the question: what would a child have to do or be to deserve being kept in detention, and for years? The response has often been: "Do we really do that?" or "Not in my name!" And from children "What would you want to do that for?" For me it beggars belief and deeply disturbs my sense of Australian decency. Don't we Australians love children? And value families?

Yes we - the Australian people - do detain innocent children. Thousands have been released but over 100 still languish in Australian detention, including 70 on Nauru and 16 on Christmas Island. Another 150 or so live in "short term detention" or free but not free in the community, in low security or foster care, still under surveillance. Experts describe living conditions in detention as toxic and irrevocably damaging to people, especially to children in their formative years. The 70 children still on Nauru (including 3 unaccompanied minors for whom the Minister is legal guardian) have been there either since they were born (18 are infants under 4 years) or since HMAS Manoora forcibly landed them on this desolate island (the size of Russell Island in Moreton Bay) after a dramatic rescue at sea, in September 2001. The accumulating evidence and legal advice about the violations of the rights of children and of human rights in immigration detention have been wilfully ignored by Government.

It seems that most Australians have not given much thought or imagination to what it means to be unjustly detained, to be subjected to the authority of guards in uniform who control every aspect of lives inside the razor wire. It is the absence of freedom and hope that is so destructive, the vacuum that should be a future. I know there is a shift in community awareness and understanding - thanks to the significant and growing army of ordinary Australians involved in human rights and refugee advocacy. Rural Australians for Refugees for example, campaigns strongly that getting the facts right is the important first step to understanding. Chilout - Children Out of Detention - is self-evidently focused on the rights of all children to health and happiness and a decent life. In our nation of migrants and refugees from 160 source countries there are individuals and groups who have experienced detention. Former prisoners of war - military and civilian - know what it is like to be unjustly and inhumanely imprisoned. I am sad that that not more refugees and migrants have spoken out in support of the latest wave of asylum seekers, to tell us all what freedom and peace means to them and to anyone who has to flee persecution.

Our political leaders - and all who have remained silent on the subject - have knowingly continued the policy of indefinite detention and so added to the suffering and torment of fellow human beings. Silence condones. Individually many Parliamentarians of all parties are uneasy about this. To them it also feels and looks like harsh punishment. And punishment for what? It has become so clear to us from media coverage over three years that Iraqis, Afghans and Iranians were fleeing persecution and seeking a democratic society where people are free and children can grow up in peace and safety. And yet, the Government actively and passively perpetuates the myth and falsehood that asylum seekers are "illegal immigrants". Pray tell us, Prime Minister, what is illegal about seeking safe haven and what is the distinction in law between an asylum seeker and an immigrant?

In September 2002 activists in Brisbane gave evidence to the Inquiry into the Detention of Children announced by the Human Rights and Equal Opportunity Commissioner in November 2001. The delay in finalising this report with its clear and compelling findings of systemic child abuse and breach of international law comes as no surprise. The delay was certainly not of HREOC's making. The facts and the truths which it reports are, of course, unpalatable and domestically and internationally embarrassing to the Government perpetrators of mandatory, non reviewable indefinite detention. While ever the report was not finished and tabled in the House of the People, the policies and practices could continue. Could be more of a deterrent. Be more of a punishment and therefore more of a deterrent? The damage to children and men and women who have committed no crime, was allowed to continue. And in the process, hundreds, no thousands, of Australian public servants, servicemen and women (especially in the navy and SAS), and the contracted teachers, doctors, psychologists, nurses and detention guards have been corrupted and brutalised by carrying out the Government's inhumane policies. It surprises me that not more have blown the whistle on human rights abuses they have witnessed. It is not too late.

To our credit as a compassionate people, thousands of Australians have befriended asylum seekers who came by boat and who are still in detention (about 400 Iranian, Afghanistani and Iraqi asylum seekers). Letters and phone calls and visits sustain them in the battle with despair and hopelessness. And firm friendships have formed with many of the nine thousand or so refugees granted temporary visas and released from the hell holes of Curtin, Port Hedland, Woomera and Baxter detention centres. We have learned from them about the devastation, the total loss of personal freedom, the despair and disbelief that an asylum seekers' search for freedom could and did result in their imprisonment instead. Their own stories on suffering are now being told in art, writings and drama. The memories and nightmares of the additional traumas of Australian detention persist, and will do so until death, something to which our veterans and survivors of concentration camps can testify.

How can a war traumatised, terrified unaccompanied minor, speaking no English - a boy under 18 without family - ever forget his months in isolation (read solitary confinement)? How could he possibly learn, supposing secondary schooling was available in detention? (It was not). Where was his guardian, to protect his rights as a child, as a human being? Will "Ali" ever forget his 12 year old anguish at leaving his friends behind after 8 months incarceration in Woomera? Highly intelligent and thoroughly politicised by the adult prison environment, he was totally caught up in the dark despair that leads to self harm. His Dad watched over him closely, to prevent another suicide attempt. It was undoubtedly the dysfunctional detention experience that robbed him of his will to live. On release into the community he implored us for help to tell his story to the media: "How can I be happy here, if my friends are still in the cage? We must get them out. We are not animals. Why do you keep us in the big cage? We are people, not animals." His passionate cry haunts me. Nor can we, who saw a two-year-old marching the length of the Romero Centre, shouting "DIMA! FREEDOM! DIMA! FREEDOM!" ever forget that perhaps the first and only English words of this refugee child was a cry for freedom. In our Australia.

Refugee and detention policy is not pro family and does not respect the rights of children to live happily in their family and in freedom. New Zealand recently rescued the wives and children of nine Australian refugees who were stranded for over two years on Nauru. The families were reunited in New Zealand, which thankfully responded to intervention by the UNHCR in Canberra and Andrew Bartlett, leader of the Australian Democrats to resolve this human rights disaster. Normally refugee status would be extended to the dependant wives and children of a man recognised to be a refugee according to the UN convention. UNHCR does. Australia does not.

At least thirteen destitute wives and their children are known to be in Indonesia for more than two years, waiting to be reunited with refugee husbands living and working lawfully in Australia. Children who have forgotten what their daddies look like. Refugee men on temporary visas are prohibited from sponsoring their family. Nor are they granted the travel document to visit their family and to return to the safety of Australia- a breach of their human right to freedom of travel. The gut-wrenching grief of the men separated from wives and children is utterly distressing to witness, and it has gone on for three and more years. I can think of nothing more cruel and unjust than to deprive a good man of his identity as the protector and provider for his family. Why do we do this? Why do we deprive children of the love and care of their father?

I feel shame that my country blatantly breaches the international convention on the rights of the child, violates the human rights of asylum seekers and refugees, torments proven refugees with the insecurity of three or five years of temporary protection and fear of deportation to the scene of their persecution. These are not the values and the acts of civilised, compassionate people. I expect that future generations will see this period in our short history as one where the forces of darkness prevailed, and the majority of us forgot our history and origins as the descendants of the First Fleet and other boat people. We were fearful of strangers and repelled and excluded them when we could have welcomed them as men women and children fleeing unbelievable suffering and persecution: "There is room for you. You are welcome to live together with us in peace, freedom and harmony. We hope you will find happiness here and be able to put the fears and grief of your other life behind you".