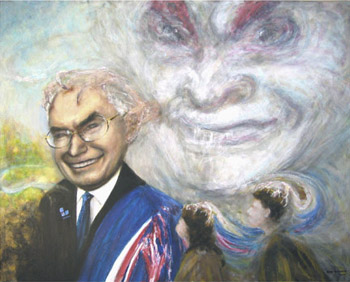 When the Terrorist Strikes

Image: Robert Bosler's painting of John Howard - click on the image for more...

The new federal anti-terrorism Bill is upon us, and right around Australia groups of people gather to dissent. In Western Australia, a Forum attracts ALP Dr Carmen Lawrence and Greens Senator Rachel Siewert as speakers.

In other States, more actions take place. This is a page for some links and relevant material.

17 November 2005: Will you Cross The Floor, Senator? - an unexpected window of opportunity has appeared, small, but significant. While Parliament was planning to rush these laws through, delays caused by the Industrial Regulations Bills postposed the debate and the voting for the Terror laws in the lower house.

12 November 2005: Of Treason and Sedition - Stop acting like an artist, and especially, stop critiquing Australian society if that includes the Howard government. You may be accused of treason or sedition. Some people already are, in underhand communication coming from the Prime Minister's office.

10 November 2005: Decent Liberals and their terror fears - two of the most interesting speeches in Parliament this week, and they're both from the government bench -from two Liberal party members, Petro Georgiou MP, and Steven Ciobo MP.

4 Nov 2005 Perth Forum: Michael Sinclair-Jones: Risking a Totalitarian State - My union believes the penalty aims to silence journalists, intimidate them into submission, and will allow miscarriages of justice to go unquestioned and - inevitably - unnoticed.

When the Terrorist Strikes...

October 2005 - With the anti-terrorism legislation looming both large and dark at present, everyone who in 2001 and beyond became active on human rights and refugee issues or who in some way has regarded him/herself as part of "the refugee movement" as it has become known since TAMPA, needs to seriously review what the real issues during and since TAMPA in September 2001 were.

In our view the TAMPA drama, the legislation and the ensuing horrors were not really about refugees, but about Australian conservative politicians trying to establish a dictatorship by elected government through the sneaky and incremental exclusion of scrutiny and review by Australian courts and through a subtle undermining of the role and powers of the judiciary, and about a horrific thrashing of International Civil and Political and Human Rights Conventions in this process - not accidentally, but by design. Viewed in this context, the terrorism legislation is just "the next step" for our 'mini-dictator' John Winston Howard. And, if you're nervous and unsure about who your real enemy is, read Bruce Haigh's remarks on our website.

The list below shows page links to the Project SafeCom website as a resource of information - we have been vocal on issues of accountability, openness in government, arbitrary detention of asylum seekers since September 2001. Additionally, some links are included to the issues at stake, both directly relating to the ASIO Bill and the terrorism legislation and to the background issue of undermining or exclusion of both political openness and democratic accountability and the role of the Judiciary (and there are hundreds more pages on our website!).

Under the new laws, it is possible that while we sit down to our Christmas dinners, Australian terrorism suspects will have been secretly rendered to offshore preventative detention on Christmas Island, effectively beyond reasonable defence lawyer access and the protections of Australian law. The new detention centre there is nearly ready for them now.

In a country without a Bill of Rights, the prospect of more draconian Terror Laws delivers ultimate control through fear. Australia, with its history of penal colonies, racism and detention centers, is now set to become a police state.

Multiculturalism does not breed terrorism

Petro Georgiou's reply to the terrorism Bills: "... the commitment to multiculturalism has been a demonstrably successful response to the diversity of our population. In the war against terrorism, multiculturalism is an ally and not an enemy."

Feeling squeezed on a magnetic strip?

The London bombings provided a convenient intersection of events with the DIMIA debacles for Australian politicians, and consequently we revived the debate around the formerly failed Australia Card - the ID Card.

Undermining of Judicial and other Review

The Federal Parliament and the Protection of Human Rights

By George Williams - "The Federal Parliament has a central role to play in the protection of the basic rights of the Australian people. To date, this role has not been fully realised."

Does Australia Need a Bill of Rights?

Chief Justice David Malcolm's speech delivered in 1998. "The guidance provided by a Bill of Rights would be one way of both assisting the courts as well as re-asserting the supremacy of Parliament".

To propose further limits on legal services and judicial review after the wrongful detentions of Rau and Alvarez suggests that the Government has learned nothing from these tragic cases. These laws do nothing to confront the culture of denial and secrecy in the Immigration Department.

Howard still tries to tell Australians that his government was "exonerated" by the Senate Inquiry, as recently as two weeks ago in a letter to Robin Rothfield of Labor for Refugees Victoria.

Don't ask too many questions

The story of DIMIA's cover-up of the Vivian Alvarez affair. This is a copy of a 2-part article from the Sydney Morning Herald, written by investigative reporter David Marr: "The lies that kept Vivian Alvarez hidden for years" and "The cover-up comes unstuck".

When the Baxter fence closes: life after permanent detention

Life after Petro Georgiou seems to have changed considerably with detention centres running near-emtpy for asylum seekers. But, has it improved?

The 2005 Senate Inquiry into the Migration Act

The two submissions Project SafeCom sent in for the Inquiry: Removals from Australia should be in line with Convention demands; The primary refugee determination system and also the RRT determinations have led to prolong the sheer agony of asylum seekers....

David Marr and The Palmer Report

The Palmer Report, or the report of the Inquiry into the circumstances of the Immigration Detention of Cornelia Rau, is damning. And so is David Marrr's analysis from the Sydney Morning Herald.

The backbenchers' working groups are set to become the true pressure groups within Parliament, and while the PM may well claim that the coalition holds a majority in both Houses, he should be warned...

Myths are being peddled...

Myths are being peddled by A-G Philip Ruddock, Hon Peter Costello, intended to influence Mr Malcolm Turnbull and others in the Liberal-National Coalition, in what we see as an attempt to discredit the Petro Georgiou Bills. Here are the facts that debunk those myths.

You may need to consider how you will have to publicly declare your hand of OVERT DISSENT, and make this dissent loudly public.

The coordinator and operator of Project SafeCom for example, cannot possibly comply with the "secrecy provisions" of the legislation: he is accountable to the Steering Committee in the first place, to the Project SafeCom Members in the second place, and to the ever-increasing number of our supporters in the third place; and because Project SafeCom has developed since TAMPA as a civil voice right around Australia with many hungry listeners and watchers, we see ourselves as obliged to let ALL the reporters and journalists know immediately and forthwith, should the event arise that ASIO becomes "interested" in what we do or what we do not know. Already we are preparing to develop mechanisms to ensure that direct lines to the Australian media, should such a case arise, are fed, directly and effectively - so it will be loudly and widely reported in the National media.

Secondly, you may need to consider whether in your life a case exists for passively, or actively and loudly, UNDERMINE these laws, should the proposals pass both Houses of Parliament.

But remember, tell a friend, tell all your friends, all your family and all reporters in the media you know.

From the Public Perth Forum "LAWS OF TERROR"

This communiqué will form the basis of a media release for the organisations and individuals supporting the forum of which there were over 40 and assist in preparation of formal submissions to the Senate Legal and Constitutional Committee.

Concerns about the undemocratic nature of the process

With respect to the processes surrounding the legislation, we express deep concern about the following:

Concerns about the Legislation

We express serious concerns about the legislation itself.

The overall feeling of the meeting was that if this legislation were to be enacted in the form that seems likely, then it will be a clear sign that the terrorists are winning in any desire they may have to undermine our democratic freedoms.