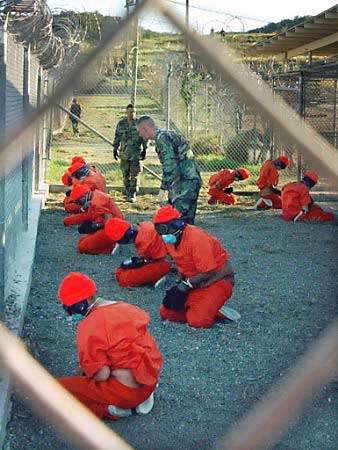 Since Australia introduced its Anti-terrorism legislation, first in 2003, and later additional legislation in the 2005 Anti-terrorism Bill, community fury has grown with what has clearly been identified as a series of serious undermining pieces of legislation with regards to human rights and prinicples of liberty and due process for those who are "suspected" of being connected to terrorism action or terrorist groups.

This page lists the archive of the "orange" section of our website.

Although we maintain a more liberal definition of the Anti-terrorism section of our website, because of the overlap with related issues - such as the war on terrorism, inevitably leading to our outspoken dissent with the invasion of Iraq ('The Iraq War') by the 'Coalition of the Willing', many pages related to this issue are not listed in this archive, but in our other archives.

That's the reason for also the orange box with "quick links" to both pages in this orange section and links in the "grey" section, the section for Human Rights in Australia: a discussion of the Iraq War is present on dozens of pages in the grey section.

2 November 2008: Mamdouh Habib, My Story: The tale of a terrorist who wasn't - For the first time, Mamdouh Habib reveals the full story of his journey to hell and back. He exposes the complicity of the Australian government in his abduction and maltreatment, as well as its subsequent neglect of him while in Guantanamo. He also describes his encounters with other well-known alleged terrorists, including his meetings with David Hicks both in Afghanistan and in Guantanamo. "Everyone had terrible stories to tell ... catching foreigners was big business. It didn't matter if they were terrorists or not, the Pakistanis told the Americans that they were anyway."

27 January 2007: Five years for David Hicks: it's quite enough! - Philip Ruddock, an Attorney-General who is 'grossly inaccurate', misleading in argument, in breach of the standards of the Australian criminal code, and who misrepresents the law? Ask former chief justice Alastair Nicholson and Queens council Lex Lazry.

6 December 2006: After five years, Bring Hicks Home! - "He lives in a cell of featureless walls, 24-hour lighting and a single window of frosted glass that in daylight glows like a fluorescent globe," write Ian Munro and Penny Debelle in The Age, when the fifth year in Guantanamo Bay ends for David Hicks. Also on this page, Naomi Klein reports on the 'culture of torture' of her neo-conservative government.

23 September 2006: Hugo Chavez and Mahmoud Amadinejad at the United Nations - During the UN session of September 2006 two remarkable speeches shot some serious holes in the credibility of the USA, and its role as "the world's policeman". Here they are, both on our website.

6 September 2006: Fun, Laughter and other Seditious Causes - Make the right joke in public, and the man in dark glasses will follow you around town. Draw a cartoon, and find yourself in a secret court. Write a hot news article, and you might end up in jail. Deep, depressing issues or ... a seriously entertaining evening of Forum Theatre! Join Orisha's performers Rina Sani and Omar Pumar Romay for this special event at Kulcha.

14 May 2006: Iranian President Ahmadinejad writes to George Bush - "Liberalism and Western style democracy have not been able to help realize the ideals of humanity. Today these two concepts have failed. Those with insight can already hear the sounds of the shattering and fall of the ideology and thoughts of the liberal democratic systems."

20 December 2005: Jones and Lawrence: ALP leaders and the Terror laws - The ALP under the federal leadership of Kim Beazley did not cross the floor on the passing of the Terror laws in Federal Parliament - and while we think they owe some serious answers about this to the Australian electorate, there are some speeches from senior party members...

19 December 2005: An empty Senate as Terrorbill becomes law - "It is very important that people looking back on this moment know that the opposition caved in, to a government with a one-seat majority, to taking away Australians' rights without any return defined in terms of security and to eroding those rights unnecessarily--in particular, the right to free speech and the right not to be held without charge, trial or the ability to have a defence."

17 December 2005: Warning: this page may contain seditious writings - Read the information on this page by all means - but if you do, you may be charged with sedition under Australian law. You may even be charged by association - and you may not be told when you get arrested why you have been arrested.

15 December 2005: Terror laws at the West Australian State Labor Conference - On the weekend of 26/27 November 2005 the State ALP Party Conference took place in Perth. Delegates of the WA Anti-terrorism legislation Action group attended the conference and engaged the delegates, with a degree of success. Colin Penter of the WA Social Justice Network reports, followed by the motion that passed and an extract from the ALP Policy.

4 December 2005: Malcolm Fraser: Human Rights and Responsibilities in the Age of Terror - "The fact that the Government, with the support of the Opposition, has moved so far away from the Rule of Law demonstrates the fragility of our grasp of a liberal, democratic society. If we stand silent in the face of discrimination and in violation of the basic principles of humanity, then we betray our way of life."

29 November 2005: Speaking about the Bill: 3 Parliamentarians speaks out - On this page, three remarkable speeches in reply to the Anti-terrorism Bill No 2, 2005 - from 29 November 2005: Senator Marise Payne (NSW) who also chaired the Legal and Constitutional Legislation Committee's Inquiry; the Hon Simon Crean and last but not least, Independent for Calare Mr Peter Andren.

19 November 2005: Tony Kevin: The subversion of Australian Democracy - Under the new laws, it is possible that while we sit down to our Christmas dinners, Australian terrorism suspects will have been secretly rendered to offshore preventative detention on Christmas Island, effectively beyond reasonable defence lawyer access and the protections of Australian law.

17 November 2005: Will you Cross The Floor, Senator? - an unexpected window of opportunity has appeared, small, but significant. While Parliament was planning to rush these laws through, delays caused by the Industrial Regulations Bills postposed the debate and the voting for the Terror laws in the lower house.

12 November 2005: Of Treason and Sedition - Stop acting like an artist, and especially, stop critiquing Australian society if that includes the Howard government. You may be accused of treason or sedition. Some people already are, in underhand communication coming from the Prime Minister's office.

10 November 2005: Decent Liberals and their terror fears - two of the most interesting speeches in Parliament this week, and they're both from the government bench -from two Liberal party members, Petro Georgiou MP, and Steven Ciobo MP.

4 Nov 2005 Perth Forum: Michael Sinclair-Jones: Risking a Totalitarian State - My union believes the penalty aims to silence journalists, intimidate them into submission, and will allow miscarriages of justice to go unquestioned and - inevitably - unnoticed.

6 October 2005: When Terrorism Outlaws Democracy - In a country without a Bill of Rights, the prospect of more draconian Terror Laws delivers ultimate control through fear. Australia, with its history of penal colonies, racism and detention centers, is now set to become a police state.

23 March 2003: Why Project SafeCom opposes the invasion of Iraq - Why Project SafeCom opposes the invasion, why it is corrupt, and what some other people say about it. "One of the chief agendas for the USA is the control of the oil-rich countries - and interwoven with that, is that the key agents in the policy formulation are also those in significant positions of control of the oil industries, such as Dick Cheney, Jeb Bush, George W. Bush, Condoleezza Rice, Donald Rumsfeld, Donald Evans, James Baker."

13 December 2002: Friday the Thirteenth: Friday the 13th of December 2002 was an eventful day in the Australian Parliament. The ASIO Bill stalled. The light went off for a while during the marathon sitting of The House. And once again, Australia veered near the abyss of a failed democracy.