Linking with other organisations for local action

For World Refugee Day 2004 we have combined forces with Amnesty International and Oxfam Community Aid Abroad for a great family day of local action in Fremantle.

The day begins with the Daybreak in Detention project at the Fremantle Markets and The Field of Hearts at our stall.

In the afternoon we're off for some theatre at Deckchair (Something to Declare), and the day concludes with the screening of the movie The Deported.

Review the program and come see us!!!

Photos of the day in Fremantle: 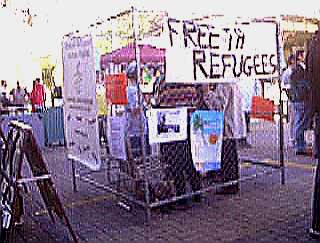 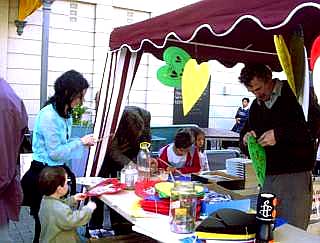 14 February 2004: The Field of Hearts project, the brainchild of Andrew Hall - Andrew Hall of Public Servants for Refugees in Canberra conceived it, and the momentum of this important project is building in preparation for World Refugee Day 2004, and the planned convergence on Canberra prior to the 2004 Federal Election. At Project SafeCom we're part of the action!

All Day outside the Fremantle Markets from 6am to 5pm

Daybreak in Detention is an event that's taking place all over the country on the weekend of June 19-20, aimed at defending the human rights of refugees. In some places Daybreak in Detention will be an overnight sleep-over at a 'mock' Immigration Detention Centre in a community hall, at others it will be a get together of school students at a friend's house, at others it will be a daytime festival, BBQ or picnic. It is up to you. You can either join an event or set one up yourself - there is a downloadable flyer with details on The Amnesty website.

The Field of Hearts

Find The Field of Hearts at the Project SafeCom stall, 6am to 5pm, Saturday June 19 (also Sun 20 June, see below)

The Field of Hearts is a visual installation project comparable to The Sea of Hands, the project expressing support of Indigenous people. At our stall outside the Fremantle markets, you can buy a heart, joining thousands around Australia to paint or write a wish for refugees, make a drawing, glue on your picture, or write a slogan or note on it. Your heart will join tens of thousands of other hearts from around Australia in its journey to Parliament House in Canberra, where they will be placed on the lawn during the Convergence on Canberra just prior to the 2004 Federal Election. The Field of Hearts was first launched in Canberra on World Refugee Day 2003.

Paint and permanent markers will be provided at our stall throughout this weekend.

For more information, see The Field of Hearts on our website.

actors for refugees: Something to Declare

True Stories of Refugees and Asylum Seekers in Australia

This is a free one-hour event launched by
Dr Carmen Lawrence, Federal Member for Fremantle

Screening of The Deported with
keynote address by Dr Carmen Lawrence MP.

Dr Carmen Lawrence is an acclaimed social justice advocate, an authoritative voice for justice for refugees, the Federal Member for the seat of Fremantle, and the National President of the Australian Labor Party.

The Deported: a documentary by
Nick Danziger, Laura Ashton and Petra Graf

A unique document about forced deportations

The Deported looks at the journey of individual asylum seekers who have been rejected by countries they have struggled to reach; it exposes the sadness, disappointment, futility and tragedy when refugees - one of them having travelled through Africa for more than nine months to reach France - leave everything behind and embark on hazardous journeys, only to be deported on a flight lasting just a few hours.

In an age of increasing globalisation with its free monetary exchange and free trade, the control, detention and forced deportation of asylum seekers contrasts starkly with the new freedoms of the global village - and it calls for a worldwide review and reconsideration: the global village needs to confront its deep-seated fear of the villagers...

The Deported follows what happens to five asylum seekers, from Afghanistan and Mali, after they are deported back to their countries.

Hamet was deported to Afghanistan after his claim that his life was in danger was rejected by British immigration authorities. The program returns to Jalalabad in Afghanistan to investigate Hamet's claims that a local leader killed his father, uncle and 13 members of his family and now wants to kill Hamet. Local villagers back up Hamet's story although they are too frightened to name the man in question, who is now working with the military. Off camera a villager tells the filmmakers' translator that the man is still hunting for Hamet.

The British officials tell Hamet the dispute is a local one and he should go elsewhere but Hamet does not believe it is safe to live openly. Instead he sleeps on a rooftop and remains in hiding.

Sardi was also deported from Britain to Afghanistan, a country which has now produced one third of all the refugees in the world. British deportees are flown out at night on charter planes - no one knows the departure time or passenger list until the plane is ready to leave. Deportees are rarely able to warn anyone of their return and often arrive home, after years away, with no one to meet them.

Britain's agreement with Afghanistan is that people can only be deported to safe areas where they can be retrained. Despite this Sardi has no choice but to return to an insecure village which offers no prospect of employment. He was arrested on his way to work and immediately deported. He was forced to leave everything he had behind including money, clothes, car, television etc without being able to arrange his affairs.

Sardi has been engaged for seven years and his fiancée anticipated that he would return a wealthy man and that they could finally announce their marriage. Instead he arrives empty-handed. Sardi's parents are in a refugee camp in Pakistan but his future father-in-law offers to sell his land to give him financial help.

Daouda's immediate family all live in France. When his parents emigrated they left him, a young child, with his grandparents. As a teenager he became determined to rejoin them and without any outside help earned the necessary money, the equivalent of three times the yearly salary in Mali, to pay for an illegal passage to France. It took him nine months crossing the Sahara to reach France but only five hours to be deported when his case was rejected.

Remittances from Malian émigrés are still a staple of its economy but France now has the toughest deportation policy in Europe and last year returned 25,000 [refugees], many of those to Mali. (from the SBS website)

Oxfam, Amnesty WA, Project SafeCom and many other groups: stalls and events in and around the Fremantle Town Hall, starting at 11:15am. More information will be posted here as it becomes available.
human rights
sustainable earth
sustainable shelter
what's new?
indigenous
bill of rights