What we do to Iranian asylum seekers

Indefinite incarceration of people without a criminal charge is one of the world's most severe breaches of International Human Rights conventions.

Yet this is what Australia does with the asylum seekers who, under the "stitched-up Migration Act", have been excluded from Australia as refugees.

This page highlights the situation of some of the Iranian asylum seekers, who are held indefinitely in the detention centres around Australia.

The desperation of asylum seekers is dramatically exemplified by the self-harm incidents we have witnessed in Australia's detention centres in recent years. We have had hunger strikes, people resorting to lip-stitching, and people 'slashing up', as it is called. Now, in the first half of 2003, hundreds of Iranians face forced deportation after "secret deportation deals" have been made by the Australian Minister for Immigration Philip Ruddock with the Iranian government.

1 August 2003: The plight of the Mandaeans: A new Iran contra deal - "The Government wants to test the resistance of Australians to this indecency. I hope they are unpleasantly surprised and that Australians will draw the line at forcing people back to situations where their very lives are at risk." In this piece, which appeared first in Margo Kingston's Web Diary, Carmen Lawrence discusses the Mandaean issue.

30 January 2003: Open Letter to Politicians Full Of Questions About Refugees - We're asking a barrage of questions about visiting Iranian Mullahs to Canberra, the secret plans to deport 190 Iranians from Australia, and on this page we're including questions about Minister Ruddock being scared for the UN Committee Against Torture or the UN Human Rights Committee.

Below are links to nine out of eleven pages from the DIMIA Information Sheet for Iranian Detainees, handed to detainees in Australian detention centres in April/May 2003.

Open Letter from all Iranian detainees in Baxter IDC

This letter is from all us poor Iranians here at Baxter, which is our prison. I have told this letter to my friend on the telephone because now we have no time. It is Friday night and we are all very frightened because they tell us that tomorrow we will be deported by force to our country.

So tonight we cannot sleep. We pray that something will save us and we try to help each other. We are real human beings and fathers and sons and husbands. We did not leave our country and our family for getting rich or big adventure. We must leave because our government is a dictatorship that tortures and kills its own people like it was in Iraq and we see on television how they open the graves of the poor tortured people. All the governments and the United Nations know that the Iranian government has no respect for human rights.

We ask for help from the government in Australia. We ask that you see that we cannot go back to Iran because we are too afraid of the torture and prison we will have to go to. Many of us have already lost family or have brothers and fathers in prison in Iran. Because we have not always explained our situation in the best way for DIMIA officers to understand, they say that we have failed and are not real refugees and the court cannot help us.

In our country, we tried to have democracy and freedom but we have been put in prison for it. Then we came here because Australia is a democratic country, but they put us in prison, too. How can we show you that we are not bad people?

Sometimes, some of us have been too stressed and sometimes we broke something in detention. We are sorry for that. We are not violent people; only sometimes we cannot endure this prison hell here any more.

Now nobody is coming to Australia anymore and your government has fulfilled its wish. But we have suffered for almost 3 years for this policy and we have suffered enough. If it would be possible for us to go home, we would have gone a long time ago even before your government offered us money to go away. But we cannot. If you will not let us stay here, please send us to some other country. A poor country or any country. We will go anywhere but we cannot go back to Iran.

We need your help in this terrible situation. Please help us and stop this deportation of us. We beg you from our heart. Signed by some of the Iranians.

Some Iranian residents
in the Baxter detention centre

Petition: the Iranians in Port Hedland

We, Iranian asylum seekers in the Port Hedland detention centre, give our permission to publish the below letter in any newspaper on the understanding that all identifying details will be changed or omitted.

We, Iranian asylum seekers in the Port Hedland detention centre, considering that it is about three years that we have been locked up in the Australian detention centres and have no hope for any positive changes in the refugee policy of Australia and we can no longer bear these circumstances, request the United Nations High Commissioner for Refugees (UNHCR) and also the government and community of Australia for settlement and being processed in a country other than Australia.

To the Rev. Prof. James Haire
President of the Uniting Church in Australia

We, Iranian asylum seekers who have been locked up in the immigration detention centres, can not to convince the federal government of Australia to change its refugee policy at all. And also we don't insist to remain in Australia.

In regard to the recent discussion between the Australian and the Iranian government about deporting us to Iran (which was unsuccessful), we are willing to be sent to other countries of refugee convention.

We emphasise strongly that we are just looking for a safe and peaceful place to live, no matter where it is.

We request you kindly to take this matter to the related authorities consideration. Your consideration about above matter is appreciated. 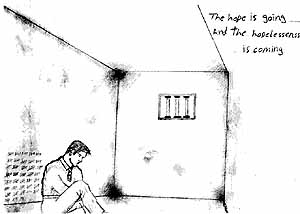 This drawing was made by a sixteen year old Iranian boy who has now been held in detention for over three years. Whilst in detention he experienced much pain, made many attempts on his life, was locked in the solitary confinement block in Port Hedland for 15 days (Juliet Block) and was separated from his parents for months.

"Cell" represents the 15 days that the sixteen year old Iranian boy spent in solitary confinement in Juliet block after the riots at Port Hedland. He said that the room was very dirty and that the door was only opened for 10 minutes each day. He said that he was given a plastic bag to excrete in. The only thing in the room was a low bed. The boy kept a tally on the wall just like the person in the drawing.

He is a member of a family from Iraq. The father's brother and his sons were executed by Saddam Hussein's forces as Shia Muslims suspected of belonging to the oppositionist Al Da'wa Party.

The father feared he would be next and fled with his family to Jordan. They weren't permitted to settle there, or in Syria, where they went after Jordan, and finally bought passage on a boat from Indonesia, arriving in Australia in December 1999. They have been in three detention centres in which their experiences were horrific, and the four children are deeply traumatised by them.

The oldest of the children, now 18, and the artist, 16, are reported to have been abused, beaten and manacled by the guards, and the other two, aged 12 and 6, are both suffering from nightmares and panic attacks after witnessing suicides, detainees slashing themselves with razors, hunger strikes and beatings, as well as from anxiety due to forced separations from their mother and their father. (The father was separated from his family for nearly 12 months).

The 16-year-old artist and the 18-year-old have both attempted suicide and carried out acts of self-harm, including striking the razor wire and sewing their lips together. Yet as the artist told a psychologist: "I'm not crazy. I just want my freedom." They were locked up for 36 months of their young lives, denied a proper education (the artist wanted nothing more than to go to high school but there's no schooling for over-12s) and treated like criminals during their time in this country.

A young Iranian man of a peaceful disposition, never a trouble maker, said of his impending deportation to Iran and after years in detention in Australia: "I can't take this anymore. At least for the 10 hours on the plane I will have freedom, before they kill me".

This man has converted to Christianity, and that is a capital offence in Iran. He won't be able to contact his family, because it would put them in danger. How alone can a human be.

Will the Australian Government track what happend to the men, women and children being forced to go back to Iran, from which they fled in fear? What has changed in this time, to make it safe for them?

"The Government significantly restricts citizen's rights to change their government. Systematic abuses include summary executions, disappearances, widespread use of torture and other degrading treatment reportedly including rape, severe punishments such as stoning and flogging, harsh prison conditions, arbitrary arrest and detention, and prolonged and incommunicado detention.

The Government uses the judiciary to stifle dissent and obstruct progress on human rights. The Government infringes on citizen's privacy rights, and restricts freedom of speech, press, assembly and association. Over the last two years, the Government has closed nearly all reform oriented publications, and brought charges against prominent political figures and members of the clergy for expressing ideas viewed as contrary to the ruling orthodoxy".

In his report to the United Nations Human Rights Commission in March 2002, the Commission's Special Representative for Iran, Professor Maurice Copithorne: