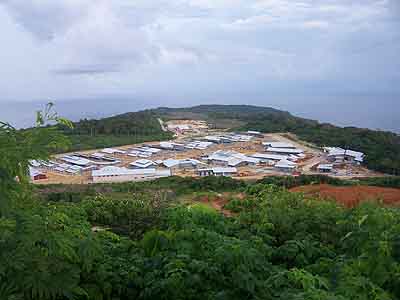 Like a giant environmental scar in the pristine landscape, the maximum-secure refugee jail or 'detention centre' on Christmas Island is an indictment on Australia's rapidly deteriorating human rights frameworks

Thanks to everyone who took part in the ALP Letter writing campaign!

Thanks very much to the hundreds of people who took part in our project!

During the campaign, you sent your letters and comments from our website to Opposition leader Kevin Rudd and to ALP's Immigration spokesman Mr Tony Burke.

This page lists some of the media coverage of the letter writing campaign.

Following the media coverage items, there's a sample of comments you made to the ALP about its policies.

:::UPDATED::: 10 April 2007: Alcatraz Down Under - The monstrosity is nearly complete... - Like a gigantic scar cutting through the pristine wilderness, the Christmas Island detention centre blights not just the hillside of the island, but also the Australian psyche.

10 April 2007: You told Labor what you thought: The letter writing campaign to Kevin Rudd and Tony Burke - During the last half of April 2007 hundreds of people wrote to Labor, prior to its National Policy Conference in Sydney. Here's the text of the letter and some of the concerns about Labor's policy relating to unannounced boat arrivals as expressed in the media.

Refugee advocates are urging Labor to adopt a more compassionate policy towards asylum seekers ahead of the party's national conference.

Refugee groups in recent months have accused Labor of trying to adopt even more hard-line immigration policies than the government, which has excised islands from Australia's migration zone to prevent refugees claiming asylum.

The letters accuse Labor of poaching Prime Minister John Howard's refugee policies and call on the ALP to dump the hardline at its national conference this weekend.

The authors had called for Labor to adopt a more humane refugee policy, Mr Smit said.

"Many writers also made it clear that their Labor vote is conditional upon the party drastically changing its current policy direction in moving away from aspects dictated by the Howard government," he said.

In the lead-up to Labor's national conference, beginning in Sydney on April 27, WA-based advocacy group Project SafeCom has urged supporters of refugees' rights to pressure the ALP leadership to ensure that a government led by Kevin Rudd won't commit the same human rights abuses witnessed during PM John Howard's reign (some of which, such as the Tampa affair, were carried out with ALP complicity).

Labor intends to maintain the Christmas Island detention centre established by the Howard government and maintain Australia's migration "exclusion zone". Australia is a signatory of the UN's convention on the rights of refugees, however asylum seekers who land on one of the 4600 islands within the zone do not have access to the protections granted by the convention or by Australian law.

Project SafeCom has established a page on its website, allowing people to easily send a letter to Rudd and opposition immigration spokesperson Tony Burke expressing their views on rights for asylum seekers.

What you told Rudd and Burke

"We decided who will come in to this country and the circumstances in which they arrive when we signed and ratified the Refugee Convention..."

The remarks are categorized in the following sections:

The campaign brought the attention of Rudd and Burke to three points of Labor's asylum policy that were unacceptable to the writers:

In addition to the "set text" of the letter proposed by Project SafeCom, that could be "switched off" if desired, writers could add their own paragraphs to Mr Rudd as well as Mr Burke.

b. Seeking Refuge with the Greens?

d. A selection of other remarks