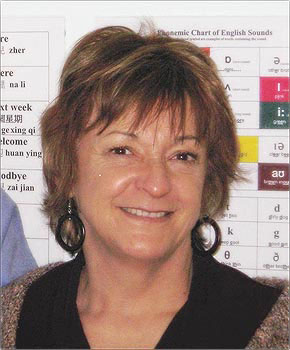 Since John Howard's Tampa scandal in 2001, thousands of ordinary Australians stood up and baulked at the treatment of maritime asylum seekers sailing to Australia.

While many, symbolically speaking, walked to the shore, waved at the asylum seekers and said, "We welcome you, unlike our government and other people in our country", others marched to Canberra and "pushed against the walls of John Howard's bastion" in Parliament House.

This page is the story of one of those advocates and activists: Nayano Taylor-Neumann from South Australia.

She became a worker at a settlement program, a Blogger and a PhD student. And she became one of Project SafeCom's supporters and members.

2 April 2008: Remembering Betty Dixon, our feisty advocate - Australia incarcerates asylum seekers in detention centers - but people like Betty Dixon were not willing to accept it. She did not have the face of a typical rebel against the system, a system she described as "degrading to humans and racist". She was one of the thousands of "ordinary Australians" who vigorously protested against mandatory detention, but for some reason many people remember her, even in the years after she passed away.

12 March 2005: The testimony of Moira-Jane - Moira-Jane Conahan went to Woomera in March 2000. Her speaking out was one of the first witness testimonies that eventually dismantled the Woomera detention centre. "The night before I left we were watching Four Corners [...] but I laughed it off and with a minor amount of trepidation left for Woomera."

11 February 2005: Visiting Baxter: Joy Huson and Gareth Evans visit the Baxter detention centre - "Her case exposes the treatment of people by DIMIA, the bungling by Public Services and the "I didn't know" from politicians who surely are required 'to know'."

11 October 2003: Human Rights Watch Commentary On Australia's TPV's - Australia is the only country to have legislation permitting refugees under the 1951 Refugee Convention to remain in the limbo of temporary protection forever ... Most egregious is the flagrant disregard for the well-established human rights principle of family unity in the TPV system.

Why Nayano does what she does

I'd like to tell you the story of why I am now writing the blog A Possie in Aussie, about marginalised migrants in Australia and the world.

Prior to the 2001 election I had at most a vague interest in refugees (fuelled by middle-class guilt, I suppose). I had been a teacher and consultant to teachers of difficult kids - marginalised kids, I suppose you could call them. The events of 2001 - the Tampa, the 'Children Overboard', not only disgusted and enraged me, but began my education in forced migration. I came to understand something about asylum seekers, and the conditions of the Temporary Protection Visa. The TPV's denial of access to the Australian Migrant English Program (AMEP) particularly irked me. It is senseless to have people in our midst who cannot speak English: bad for them but also bad for the rest of society.

When I get really mad I have to act. I had skills in teaching English that I could use to help TPV holders, and started to look out for opportunities. In early 2002, through church contacts, I heard about some people in Murray Bridge who had started a group to help TPV holders in the town to learn English. That's all I knew - but I was IN! I joined the group within weeks of its first meeting, and continued as a volunteer with the group until the end of 2004. I knew nothing about Murray Bridge (about 70 km from my home), no-one in the group, and nothing about the Hazaras of Afghanistan who were the TPV holders I was to teach. (Wow, I have learned a lot!)

In 2004 I was employed by the Murray Bridge Community Health Centre to assist the men to prepare for their interviews with the Immigration Department, and since 2005 I have been employed by Lutheran Community Care to provide the Immigration-funded settlement programs in Murray Bridge. We have had the joy of meeting and helping the men's families to settle in the town as they received Permanent Protection Visas.

As a result of intense efforts by members of the community, funding was found for the Murraylands Multicultural Project. The project trains and coordinates volunteer tutors and provides limited settlement services for the Chinese. I am the manager of this project, as well as working in the DIAC-funded refugee settlement program.

My motivation for having the two positions is that I am able to provide assistance to any new settler in Murray Bridge, without verifying that they are 'eligible'.

The Chinese in Murray Bridge are now living under the threat of being returned to China against their will: (for more details see 'Chinese Checked', or you can listen to me speak about this or read the transcript of the broadcast I made for ABC Radio National's 'Perspective' program).

There are thousands of families across Australia who arrived in 2005 -2006 on regional temporary skilled migration visas. Most were sourced by abattoirs to provide slaughter men, boners etc. Their visa conditions were the same as for other migrants on these visas - that is, that they could apply for permanent residency, leading to citizenship, if they worked well in their new jobs for 2 years. What was different is that the Australian government waived the requirement to meet 4.5 of the IELTS test in English proficiency. (source)

On January 1 2009 I began my blog about marginalised migrants in Australia and the world: A Possie in Aussie.

I have come to see marginalised migrants as the bellwether of society-wide problems, and write about this regularly:

'They took our jobs' was the rallying cry of the residents of South Park when they demonstrated against refugees from the future. It was funny because it reflected a painful reality - many people really do think that immigrants take their jobs.

Dave Bennion asks a blindingly obvious question in his recent blog : "Why then, do you blame your co-workers, who still earn less than you and are struggling as much if not more than you, and not your employer who breaks the law and takes advantage of all his/her employees?" (source)

IN 2006, when Guterres last briefed the Security Council, refugee numbers were the lowest they had been in 25 years. This has changed dramatically, with numbers now at 11 million.

Guterres said that this has mostly been due to the conflicts in Iraq and Somalia. Crises stretching from south and south-west Asia, through the Middle East to Sudan, Chad and the Horn of Africa - account for about two-thirds of the world's refugees. (source)