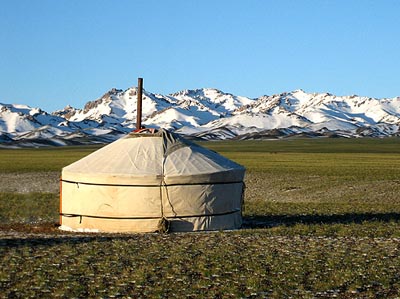 One of the most fascinating designs from around the world is the nomadic dwelling of some indigenous population groups in the Tibetan highlands, amongst them the descendants of the Mongolians. They called their tent-like structure Gers. They are also known, and perhaps better known, as Yurts.

What is a Yurt?

The Yurt is basically a tent that can be put up within half an hour, and at Project SafeCom we introduce this type of shelter because of its exquisite design as well as its usefulness as a semi-permanent dwelling, suitable for visitors or short to medium-term residents on the property.

The Yurt is durable, strong in high winds, it can be heated with a heater placed inside it, and by lining the inside with insulation material, whether this would consist of blankets, hides or woollen insulation panels, it can become a comfortable shelter in winter as well as in summer.

Because Yurts can be designed in any diameter, usually between 3 and 12 meters, it provides accommodation for a single person as well as entire families or groups, for example groups of students or participants in weekend workshops.

"There are three main types of yurt in use today. The Turkic or Khazak yurt with a bentwood roof and crown, the two tiered yurt, with a pointed roof, and the Mongol Ger. The Mongol ger is the yurt in most common use today, being home to three-quarters of Mongolia's people. The Mongolians use the word ger, meaning home rather than yurt, which is of Russian origin. There is evidence that yurts were used by the Scythian and Pazaryk peoples 2500 years ago."

Colin Duly, in his book The Houses of Mankind, comments: "Even today, nearly sixty years after the Mongolian revolution of 1921, most of the Buryat population cling to the ger as a way of life. The tent itself has changed little externally since those first descriptions. This is perhaps because the domed tent is ideally adapted to steppe nomadism and can be set up or struck by a small team in thirty minutes.

The ger is constructed with several expanded lattices forming a circular wall which meets a post-and-lintel doorway. Willow rods, connected to a heavy wooden hoop which forms the apex of the roof, are tied to the framework. As many large pieces of felt as needed to keep out the cold are wrapped around the walls and over the roof and fastened with horsehair rope."

The Mongolian Artisans' Aid Foundation still makes Yurts and sells them on-line. From their Web Site comes the following appraisal:

Environmentally friendly, stable, adaptable, portable, secure, weather proof, warm in winter, cool in summer, longlasting and fun! The Mongolian ger has been a home of the Mongols for over 2500 years. Originally they were handcrafted in Mongolia using sustainable local woodland products. The Ger is a spacious, easily transportable, weatherproof felt tent which is easily erected in less than half and hour.

It takes a skilled craftsman about one month to build the basic ger, painting and carving of the frame adds significantly to this time. Once made the ger can be erected and ready for use in 30 minutes, or taken down and packed in half this time.

The packed ger can be easily transported in small van or car, or by camel or even by yak. The frames are constructed of high quality local timber, selected from the forest by the ger-maker himself. The covers are of thick felt, made from the wool of Mongolian sheep, with a cotton outer layer. Sizes range from 13 ft to 45 ft in diameter.

The walls of Mongolia Ger are known as khana. Two or more of these Khana or wall sections tied together make up the walls of the ger.

"The Mongolian yurt, or ger, is a round, nominally portable, self-supporting structure suitable for camping in comfort. It does not rely on ropes or stakes to hold itself up; rather, the walls, rafters, roof ring, and tensioning bands all work against each other, in a marvel of physics and engineering, to keep the structure standing. It is thus an especially appealing structure for camping events where space is at a premium, because all of the space it requires provides useful living space - no extended ropes are required as they are for pavillions." (Source)

Links to Yurt and Ger Resources

The Construction of a Yurt - by Ellisif Fkakkari (Monica Cellio). Because the rafters bear the weight of the roof ring, no center pole is necessary unless the yurt is very large. The Mongols would build their cooking fires in the center of their yurts, opening a smoke hole for the purpose. SCA campers faced with fire restrictions rarely have this option.

Mongolian Artisans' Aid Foundation - The large, white felt tent, known as a ger and seen all over Mongolia. The oldest complete ger yet discovered was in a 13th century grave in the Khentei Mountains of Mongolia. To this day it is still the preferred home to the majority of Mongolian people, the suburbs of the capital Ulaan Baatar consist entirely of gers.

Advance Canvas Yurts Virtual Tour - For centuries, The nomadic people of Central Asia and the Far East have lived in portable, circular dwellings known as yurts. The Kirgiz nomad family below is attaching decorative bands of woven cloth around the framework of their yurt. Click on "The Virtual Yurt Tour".

The Chaingang's Yurt FAQ Page. Yurt is the name commonly used to refer to a Mongolian Felt Tent or Ger. Mongolians do not usually appreciate the term because it is most often used by Western invaders. So, in spite of this page's title, we will attempt to use Ger where ever possible. Be sure to check the rest of their Site!

Lars' Yurt Page - "I live in a yurt on an organic farm in the Willamette Valley in Western Oregon. After some research, I discovered yurts. I had no idea that the temporary living space would be so wonderful that I would make it permanent."

Coyote's Paw Gallery Ltd, Santa Fe NM USA - Mongolia. - Yurt/Ger: Mongolian gers are still entirely hand-built. The timber for the framework is mostly Siberian larch from the northern taiga forests and is all hand-hewn with axes. The lattice walls are expanded when the ger is erected and collapsed when it is taken down and moved.

Pacific Yurts, Oregon, USA. a Company with a 20-year history in Yurt manufacture.

Yurts, Yurts, Woodland Yurts - Based on the Mongolian ger, home to the nomads of central Asia for over 2000 years and still in common use today. We have been individually handcrafting yurts here in Somerset (England) since 1991.